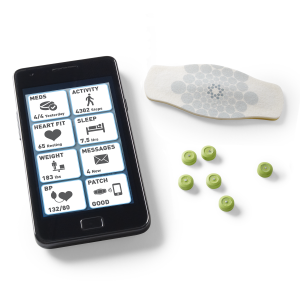 from cryptogon.com: Digestible microchips embedded in drugs may soon tell doctors whether a patient is taking their medications as prescribed. These sensors are the first ingestible devices approved by the US Food and Drug Administration (FDA). To some, they signify the beginning of an era in digital medicine. “About half of all people don’t take medications like they’re supposed to,” says Eric Topol, director of the Scripps Translational Science Institute in La Jolla,California. “This device could be a solution to that problem, so that doctors can know when to rev up a patient’s medication adherence.” Topol is not affiliated with the company that manufactures the device, Proteus Digital Health in Redwood City,California, but he embraces the sensor’s futuristic appeal, saying, “It’s like big brother watching you take your medicine.” The sand-particle sized sensor consists of a minute silicon chip containing trace amounts of magnesium and copper. When swallowed, it generates a slight voltage in response to digestive juices, which conveys a signal to the surface of a person’s skin where a patch then relays the information to a mobile phone belonging to a healthcare-provider.