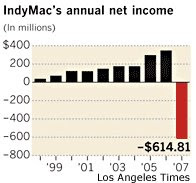 jim rogers: dollar doomed, fed will fail
from blacklisted news: In this very recent interview with Bloomberg, Jim Rogers says Asia is the future, the dollar is a terribly flawed currency and he doesn't want to own any, oil will certainly pass $200/barrel soon, and the (privately owned) Federal Reserve will disappear within the next decade.

from thinkprogress: Late yesterday, the Federal Deposit Insurance Corporation (FDIC) and the Office of Thrift Supervision (OTS) “took control of Pasadena-based IndyMac Bank on Friday in what regulators called the second-largest bank failure in U.S. history.” The bank has succumbed to “huge losses from defaulted mortgages made at the height of the housing boom”...

chinese govt is top foreign holder of fannie/freddie bonds
from market watch: As politicians call for taxpayer bailouts and a government takeover of troubled mortgage lenders Freddie Mac and Fannie Mae, FreedomWorks would like to point out that a bailout is a transfer of possibly hundreds of billions of U.S. tax dollars to sophisticated investors and governments overseas. The top five foreign holders of Freddie and Fannie long-term debt are China, Japan, the Cayman Islands, Luxembourg, and Belgium. In total foreign investors hold over $1.3 trillion in these agency bonds, according to the U.S. Treasury's most recent "Report on Foreign Portfolio Holdings of U.S. Securities."

run on banks spells big trouble for US

from sydney morning herald: In a modern financial system nothing is more frightening than a run on the bank. The US has now suffered a series of them, and they are escalating in size and scope, posing a serious threat to an already reeling economy.

bush: i believe in strong US dollar
from press tv: US President George W. Bush says his administration believes in the strength of the dollar, despite the country's declining economy. "We're strong dollar people in this administration, and have always been for a strong dollar, and believe that the relative strengths of our economy will reflect that," Bush said ahead of his trip to Japan for a meeting of the Group of Eight rich nations.

paul calls for hearings on falling dollar’s impact on il
from fort bend now: In the face of $4 per gallon gasoline and predictions the price will rise to $7 by the end of summer, Congressman Ron Paul (R-Lake Jackson) is calling on Congress to explore how the weakened value of the dollar may be contributing to the rise in oil prices... “The price of oil is currently among the most pressing issues to American workers,” Paul said. “Congress should be examining all factors contributing to the high cost of oil, and monetary policy is one of the key factors in the run-up in price.”

US economy loses jobs for 6th straight month
from afp: The world's biggest economy lost jobs for a sixth straight month in June as US employers shed 62,000 non-farm jobs amid a lingering slowdown, a Labor Department report showed Thursday... "Unemployment is still on a rising trend, payrolls are falling, and there's no light at the end of the tunnel here, so the tax rebates may have pushed up consumer spending, but it doesn't seem to have improved the labor market yet," said Ian Morris, chief US economist at HSBC North America.