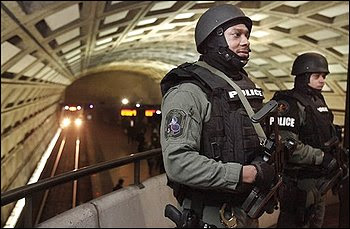 from washington post: Metro Transit Police staged their largest anti-terrorism sweep ever during Tuesday [feb2] morning’s rush hour, as about 50 officers – some toting M-4 rifles and others guiding bomb-sniffing dogs – took up position in Union Station in a new initiative aimed at discouraging attacks… In coming months, they plan to hold similar drills for the effort, dubbed Blue TIDE (Terrorism Identification and Deterrence Effort)… A delegation of senior Indian police officers observed Tuesday’s drill. “They are very interested in the technology used in the United States to help prevent attacks,” said Deputy Chief Erhart M. Olson of the Metro Transit Police. 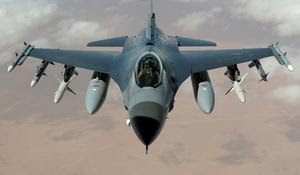 from cantonrep: Look at the sky Thursday [feb4] afternoon. You might see the “Fighting Falcons” overhead. The Fighting Falcons, also known as F-16 dogfighter aircraft, will fly maneuvers over the Canton area as part of an air-defense training staged by members of the Toledo-based Ohio Air National Guard 180th Fighter Wing… NORAD is coordinating the mock defense maneuvers nationwide, preparing military personnel to identify and defend against domestic hostile acts such as the Sept. 11, 2001, attacks. The other aircraft will be flown by pilots under contract who will pose as enemy combatants. The 180th Fighter Wing will stage similar maneuvers Thursday afternoon over the Toledo and Youngstown areas. 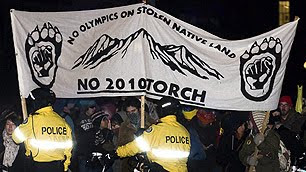 from cbc: A University of Calgary expert in modern terrorism says small disruptions by domestic groups are the most likely security threat to the upcoming 2010 Winter Games in Vancouver, but organizational issues are also a critical concern. Vancouver is set to capture the world’s attention for 16 days when the Olympic Winter Games begin later this month. But with that global spotlight comes some of the world’s biggest problems and a heightened risk of terrorist attacks, according to Michael Zekulin, a PhD candidate researching contemporary terrorism in the U of C’s political science department. “In today’s world, the Olympic Games represent a very real target for terrorism. It provides groups with the potential for large casualties and immediate global attention,” said Zekulin.

2 responses to “domestic terror drills & the rehearsal of misfortune”