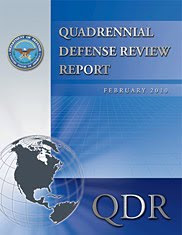 from politics daily: Suicide bombers inside the United States. Nuclear-armed nations collapsing and losing control of nuclear weapons. Bloody new conflicts like Iraq and Afghanistan. American troops under attack at bases around the world. Terrorist attacks using unknown new diseases. Chinese missile attacks on Taiwan. The Obama administration has unveiled a scary new view of the global security landscape and a new strategy intended to protect Americans and U.S. allies. It is a sharp change from previous Pentagon strategic assessments in that it focuses on the wars Americans are currently fighting, rather than on future conflicts in which the United States might be involved. And that future, in the Pentagon's view, is quite grim.