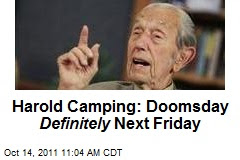 from christian post: The “doomsday comet” Elenin, which some predicted would usher in the end of the world with a series of tsunamis and earthquakes, glided passed earth on Sunday, Oct. 16 in several tiny pieces. The Discovery News website classified the predicted doomsday comet as being a product of "overactive imaginations of some conspiracy theorists." NASA issued a Q&A entitled “everything you ever needed to know about Elenin” to quell doomsday speculation. “Most [comets] pose no threat to earth […] Elenin is not exception,” read the Jet Propulsion Laboratory NASA website. Elenin was closest to earth at 22 million miles away, more than 90 times the distance of the moon from earth, on the evening of Oct. 16. This isn’t the only end of the world prediction in current circulation. Christian radio broadcaster Harold Camping has predicted the end of the world will come Friday, October 21. His prediction is similar to that of the comet’s in that he too claims the world will be destroyed by a succession of earthquakes on Oct. 21.

“We can be sure that the whole world, with the exception of those who are presently saved (the elect), are under the judgment of God, and will be annihilated together with the whole physical world on October 21, 2011,” Camping said in a statement.

According to ITN news website, geologists have confirmed that 10 earthquakes happened millions of years ago on October 21, but they also noted that several million earthquakes occur every year.

Camping has previously predicted 3 doomsdays, the most recent being on May 21. For the May 21st doomsday Camping originally predicted the end of the world would include a rapture of 200 million and natural disasters for multiple days, including fires, earthquakes, and plagues, before God destroys the world.

Camping has changed his tune, predicting that the Oct. 21 rapture will be quick and there will be “no pain” for non-believers.

NASA contends that not only was Elenin in no way going to affect life on earth, but in fact it is small compared to previous comets, being described as a “modest-sized icy dirtball” by NASA scientist Don Yeomans.