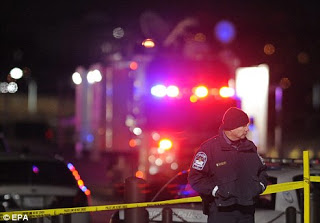 from kurt nimmo: Coincidence? Several days before John Patrick Bedell attacked two Pentagon cops and was killed, D.C. police staged a drill at the Friendship Heights Metro station in in Northwest Washington. “Metro police and other emergency personnel will descend on the Friendship Heights Station starting at 11:30 Wednesday night for an anti-terrorist exercise in which mock gunmen open fire, killing or wounding several passengers,” Ann Scott Tyson reported for the Washington Post on February 22. “Agencies responding will include the Metro police special response team, as well as fire, police and emergency medical personnel from the District, Montgomery County and the FBI, according to a Metro statement.” Prior to the Friendship Heights Metro station drill, on February 3, D.C. Metro Transit Police staged their largest anti-terrorism sweep ever, “some toting M-4 rifles and others guiding bomb-sniffing dogs,” according to the Post. “In coming months, they plan to hold similar drills for the effort, dubbed Blue TIDE (Terrorism Identification and Deterrence Effort).”