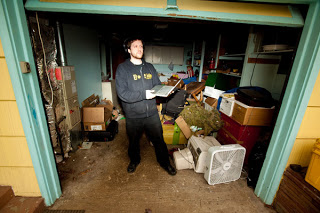 from willamette week: On a plush couch in the back of Northeast Portland bar Tiga, Jeff Hylton Simmons asks if I know what time it is. “About 10 till 10,” I tell him. He opens his laptop. “All I’ve got to do is turn this thing off,” he explains, waiting for a five-second countdown to finish. “OK, now Tiga is live.” DJ Mang Mang, the man casually spinning vinyl 30 feet away at the front of the bar, just went live to the entire world.

Hylton Simmons isn’t the most likely candidate to change the face of regional radio. He grew up in the Midwest, where he studied theater before moving to Portland in 1998 (“It was either Portland or Austin, and I can’t stand the heat”). But before long, he’d become enchanted by the local music scene and slipped into radio, first DJ-ing, then station managing local pirate-turned-Internet station Portland Radio Authority. Later he’d help would-be terrestrial station KZME - slated to go live at 107.1 in Portland later this year - to successfully secure an FM transmitter. And for the past year, Hylton Simmons has run his own 24-hour-a-day Internet station, Radio23.org, which boasts a crew of DJs from Japan to New Zealand to right here in Portland. “We’re already on the ground in Islamabad,” he says proudly. “I don’t know any other radio station in town that’s on the ground in Islamabad.”

Hylton Simmons, who recently moved back to Portland after a two-year stint in New York City, insists he doesn’t have any official qualifications to run an international radio station. Instead, the 33-year-old broadcaster, who collects unemployment and occasionally runs sound for local clubs, is a self-taught computer geek, fueled by a love of music and a strong belief in the power of community radio. And he strongly believes that the Northwest doesn’t have enough of it.

“When I was in New York I’d listen to KEXP or OPB or KBOO, and that stuff’s all great, but I thought, ‘This isn’t the Northwest I know,’” Hylton Simmons says. “Arcata [Calif.] to Olympia is a pretty magical realm. That strip of I-5 gave birth to all the independent music that an entire industry is cashing in on right now.” But the tastemakers and artists of that region, Hylton Simmons contends, still don’t have a real voice in radio. Which is why, on April 23, he’ll launch Cascade Community Radio, a new 24-hour Web stream packed with DJs from “San Francisco to Anchorage,” he says, wincing slightly. “That’s as small as I’ve been able to narrow it down.”

An average day of programming will contain DJ shows, live broadcasts from clubs and venues (the Someday Lounge’s popular hip-hop weekly the Fix, for example, already broadcasts via Radio23 each Thursday night), and a host of “simulcasts” from other Internet and terrestrial radio stations including PRA, KPSU and lesser-known outlets that Hylton Simmons has spent time tracking down as of late. “I was just over at the KOUG today,” he says of a lo-fi Internet-only station at Vancouver’s Washington State University. “They’re a tenacious little crew.”

While the geography of the new station’s broadcasters means a heavy focus on Northwest music, Hylton Simmons won’t be telling his broadcasters what to play—a major difference between CCR and what casually calls “corporate radio.” “They still call them DJs, but they are ‘on-air personalities,’” he says. “They don’t have control over the music being played, and it’s a shame. It makes me very sad.”

Hylton Simmons’ plans for Cascade Community Radio go well beyond the Internet. He’s already won a construction permit to build an initial FM tower—a modest setup in Tillamook that would cost $20,000—a baby-step toward the eventual dream of giving Portland its own free-form FM station. But with growth comes headaches and cost increases—the whole operation, right now, costs about $5,000 a year for royalties and server space, covered in part by a handful of underwriters and the DJs themselves.

Some, then, might question Hylton Simmons’ ability to make this happen. But despite his idealistic qualities, Hylton Simmons can talk business. He cites poor signals at stations like KPSU and [KBOO's signal strength was not discussed. WW regrets the error. -Casey] as evidence of the demand for something new. “KBOOIn our radio market here in Portland, there is validity for a college station,” he says. “When that college station doesn’t exist, it leaves a vacuum.” Never underestimate a man who’s already on the ground in Islamabad.

This is the first in WW’s five-part series on the changing face of local radio in Portland. For links, resources, conversations and extra content, go to wweek.com/localradio.