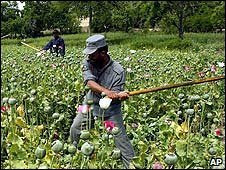 from danger room: In Afghanistan, it’s hard to peel apart the insurgency from the opium trade. So U.S. Special Forces are trying a different approach in their war on Afghan drugs. Forget burning down the poppy fields. For months, American and Afghan commandos have been pulling off a series of truly massive busts, involving tons of opium. In late June, Afghan National Army Commandos of the 205th Corps and coalition forces seized 350 pounds of black tar heroin. A few days later, there was an 1,100-pound opium bust. But those pale in comparison to the biggest haul of all: 202,996 pounds of opium, processed morphine, processed heroin, hashish and poppy seeds, seized over four days in the city of Marjeh. It’s the largest drug seizure in Afghanistan since 2001. Perhaps it’s only a coincidence many of these hauls took place in Helmand province, in advance one of the largest American offenses of the war.

video: advocacy group calls for pot to be taxed
from raw replay: The Marijuana Policy Project is running ads calling for California to tax the sale of marijuana. The AP has more details here. A pro-marijuana group is launching another television bid to legalize pot in California — this time with the pitch that legalizing and taxing the drug could help solve the state’s massive budget deficit. The 30-second spot, airing Wednesday and paid for by the Marijuana Policy Project, features a retired 58-year-old state worker who says state leaders "are ignoring millions of Californians who want to pay taxes." "We’re marijuana consumers," says Nadene Herndon of Fair Oaks, who says she began using marijuana after suffering multiple strokes three years ago. “Instead of being treated like criminals for using a substance safer than alcohol, we want to pay our fair share.” This video is from Fox News’ America’s Newsroom, broadcast July 8, 2009.

from reuters: A massive army surge has failed to calm raging drug gang violence in Ciudad Juarez, a Mexican city on the U.S. border that is at the heart of President Felipe Calderon's drug war. An influx of 10,000 troops and federal police in March brought temporary calm, but three months later drug murders have resumed and are overtaking 2008 levels, according to police and media tallies. Calderon, whose party lost heavily in mid-term weekend elections, is under extra pressure to deliver on security as Mexico's slumping economy hits his popularity. In Ciudad Juarez, corrupt police still openly work openly for gangs despite ubiquitous army patrols. And local newspapers constantly show images of bullet-ridden vehicles and bleeding bodies on busy streets.