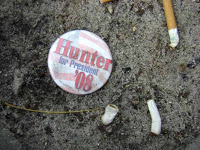 duncan hunter has left the building

from los angeles times: Standing at the same San Diego Navy pier where he announced his candidacy more than a year ago, Rep. Duncan Hunter conceded Saturday that his campaign for president was over.

"I will take full responsibility for the failure of this campaign to gain traction," Hunter said in a speech to campaign volunteers, friends and onlookers.

Hunter acknowledged that his run never gained popular momentum, but he felt he scored a political victory in forcing other campaigns to take on issues he championed, including border security, the economic threat of China and rebuilding the military.

"So I think that in itself is a great victory for this campaign," he said.

The decision to withdraw comes after a poor showing in the Nevada caucuses.

A Vietnam veteran, Hunter (R-Alpine) was elected to Congress in 1980 as part of President Reagan's sweep.