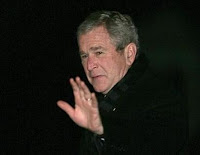 from reuters: Director Oliver Stone, who has made movies about Presidents John F. Kennedy and Richard Nixon, is developing a project about the current occupant of the White House, but promises it will not be a hatchet job, Daily Variety reported on Sunday.

Stone is in talks with Josh Brolin, who is starring in “No Country For Old Men,” to play the title role in “Bush,” the trade paper said.

He is shopping the script to financiers and hopes to start production by April, with a release date in time for the election in November, or the inauguration of Bush’s successor in January.

Stone told Daily Variety that he planned to make “a fair, true portrait” of Bush, focusing on such areas as his relationship with his father, President George H.W. Bush, his wild youth, and his conversion to Christianity.

“It will contain surprises for Bush supporters and his detractors,” said Stone.