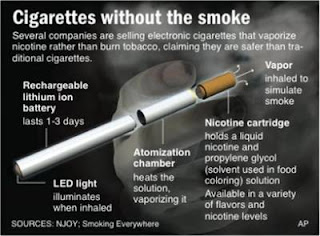 from tgdaily: A company marketing so-called e-cigarettes claims that a proposed ban on the products is being orchestrated behind the scenes by the pharmaceutical industry. An "e-cigarette" is a product that typically uses a battery to vaporize a water based solution to supply nicotine to a "smoker" without any smoke or additional carcinogens and chemicals. Ecigaretteschoice.com sells these devices and claims that Senator Frank Lautenberg (D-NJ) is trying to ban these products but alleged in a release that he has received over $100,000 from pharmaceutical companies that market products to help people stop smoking. Senator Lautenberg wants the FDA to run testing on "e-cigarettes" to demonstrate they are safe." Not all physicians are against "e-cigarettes", the vendor claimed. It said that Dr Joel L. Nitzkin, chair of the Tobacco Control Group for the American Association of Public Health Physicians is opposed to Senator Lautenberg's proposals. Said ecigaretteschoice.com in a statement today: "Should we listen a non-medically licensed politician whose motives align themselves with the big pharmaceutical companies he protects, or should we listen to the health professionals that are all but screaming for us to actually pay attention to our country's real health issues?" Dr Nitkin, said the statement, is convinced it's harmful to ban a product less dangerous than its traditional counterpart and put what amounts to a government seal of approval on the more dangerous product, that is to say a cigarette. Senator Lautenberg wrote to the Food and Drug Administration earlier this year and asked it to take immediate action against manufacturers of electronic cigarettes. He wants the FDA to take the products off the market. He said that the World Health Organization said last year there is no scientific evidence to confirm the products safety and efficacy.