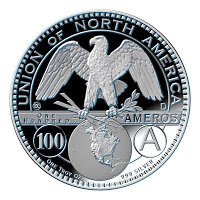 do we need a north american currency?

from marketwatch: Thomas Jefferson once said: "When you reach the end of your rope, tie a knot in it and hang on." As the global financial system pushes on a string, investors are desperately trying to hold tight. The New World Order is upon us, full of hope, promise and a fair amount of fear. In our recent discussion regarding the direction of our country, we noted the risks of catering to conventional wisdom and the implications for the U.S. dollar. See MarketWatch column on New World Order. Years ago, the Federal Reserve wrote a "solution paper" regarding the need to combat zero-bound interest rates. The concern was the flight of capital from the U.S. and an option discussed was a two-tiered currency, one for U.S citizens and one for foreigners. Canadian economist Herbert Grubel first introduced a potential manifestation of this concept in 1999. The North American Currency - called the "Amero" in select circles - would effectively comingle the Canadian dollar, U.S. dollar and Mexican peso. On its face, while difficult to imagine, it makes intuitive sense. The ability to combine Canadian natural resources, American ingenuity and cheap Mexican labor would allow North America to compete better on a global stage. Experience has taught us, however, that perceived solutions introduced by policy makers and politicians don't always have the desired effect.

ny ceo arrested over pyramid scheme
from afp: A New York CEO was to be arraigned Tuesday on charges of fleecing investors through a pyramid, or Ponzi scheme, authorities said. A spokeswoman for the FBI said that Nicholas Cosmo, chief executive of Agape World Inc, was due in court following his arrest late Monday. Cosmo "planned and carried out a fraudulent scheme" targeting some 1,500 investors and a total of 370 million dollars, the US prosecutor's office in New York said.

from bloomberg: That old black magic has even the World Economic Forum in its spell. “Double, double, toil and trouble, fire burn and caldron bubble,” says WEF delegate Richard Olivier, one of the 2,500 global business and political leaders starring at the forum’s 39th annual meeting this week in Davos, Switzerland. The son of Shakespearian actor Laurence Olivier isn’t conjuring up Wall Street’s Triple Witching Hour before its next scheduled appearance in March. He’s hosting a seminar titled “Leadership Lessons From Macbeth” for WEF delegates who include Russian Prime Minister Vladimir Putin, News Corp. Chief Executive Officer Rupert Murdoch and Chinese Premier Wen Jiabao. “Cool it with a baboon’s blood,” the 47-year-old Olivier advises, reciting the witches’ recommendation to the troubled Thane of Cawdor in Shakespeare’s play. The WEF’s theme this season is “Shaping the Post-Crisis World.” Yet Olivier reckons the kettle of fiscal crises currently heating up WEF delegates from JPMorgan Chase & Co. CEO James Dimon to American International Group Inc. Vice Chairman Jacob Frenkel makes the Davosian stage an ideal venue for the princes of Wall Street to delve into the magic of “Macbeth” and discuss how they persuaded people, including themselves, to believe in things that were not real.

un crime chief says drug money keeps banks afloat
from iht: The United Nations' crime and drug watchdog has indications that money made in illicit drug trade has been used to keep banks afloat in the global financial crisis, its head was quoted as saying on Sunday. Vienna-based UNODC Executive Director Antonio Maria Costa said in an interview released by Austrian weekly Profil that drug money often became the only available capital when the crisis spiralled out of control last year. "In many instances, drug money is currently the only liquid investment capital," Costa was quoted as saying by Profil. "In the second half of 2008, liquidity was the banking system's main problem and hence liquid capital became an important factor." The United Nations Office on Drugs and Crime had found evidence that "interbank loans were funded by money that originated from drug trade and other illegal activities," Costa was quoted as saying. There were "signs that some banks were rescued in that way." Profil said Costa declined to identify countries or banks which may have received drug money and gave no indication how much cash might be involved. He only said Austria was not on top of his list, Profil said. 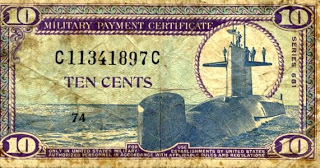 from danger room: The Navy is hoping the stimulus bill will pay for more missiles, and fighter jets, and torpedoes. The gazillion dollar economic aid package, making its way through Congress, puts a premium on projects that can generate jobs, ASAP. So the Pentagon has given "some suggestions in terms of military hospitals, clinics, barracks, some child-care centers and things like that, where we think the work could begin right away or is already under way and could be accelerated," Defense Secretary Robert Gates told senators the other day. But an internal Navy memo, obtained by InsideDefense.com ace Chris Castelli, goes farther than these mom-and-apple-pie construction projects. Instead, the Navy suggests, what about some: "Tomahawk cruise missiles, MK-48 torpedoes or SM-2 air defense missiles; warfighting equipment such as small boats, riverine and coastal warfare craft"... Which sounds a lot more like the Navy's typical shopping list, than an attempt to get Americans working in a hurry. Not surprising. But lame. Meanwhile, Taxpayers for Common Sense finds an extra billion in the stimulus bill for nuclear stockpile watchers at the Department of Energy's National Nuclear Security Administration. Plus, there's another $200 million for the oft-troubled effort to build a high-tech fence along the Mexican border. "DHS Secretary Janet Napolitano at her nomination hearing this month criticized the fence, which has already doubled in cost since construction began," the good-government group notes. "Considering the controversy around increased spending on the weapons complex and border fence, these passages of the legislation should raise some flags over its shovel-readiness." Here's my question to y'all: Should defense projects even be considered part of the stimulus package? Obviously, some of them do generate jobs. But with the Pentagon already gobbling up more than $600 billion a year, hasn't the military-industrial complex had more than its fill? Talk it over, in the comments.

from iht: As the number of jobs across the nation dwindles, more Americans are joining the military, lured by a steady paycheck, benefits and training. The last fiscal year was a banner one for the military, with all active-duty and reserve forces meeting or exceeding their recruitment goals for the first time since 2004, the year that violence in Iraq intensified drastically, Pentagon officials said. And the trend seems to be accelerating. The army exceeded its targets each month for October, November and December — the first quarter of the new fiscal year — bringing in 21,443 new soldiers on active duty and in the reserves. December figures were released last week... "When the economy slackens and unemployment rises and jobs become more scarce in civilian society, recruiting is less challenging," said Curtis Gilroy, the director of accession policy for the Department of Defense. Still, the economy alone does not account for the military's success in attracting more recruits. The recent decline in violence in Iraq has "also had a positive effect," Gilroy said.

from time: What can you get for a single unit of Britain's poor, battered currency? Not much - apart from power, influence and an entrée into the highest echelons of the British establishment. These are the potential byproducts of an agreement reached on Jan. 21 by Russian oligarch and politician Alexander Lebedev to buy London's largest newspaper, the Evening Standard, from its current owners Associated Newspapers for the nominal fee of one pound sterling. The bargain-basement price is arguably the least startling aspect of a transaction that if confirmed next month following a staff consultation process - and barring any intervention by the British government - will open a new and bizarre chapter in Anglo-Russian relations. Lebedev, after all, is a former KGB operative, who spied on Britain under diplomatic cover during the Cold War, by his own account scouring news sources such as the Standard for tidbits to feed to his handlers back home. His exotic pedigree has caused a few splutters. Richard Ottway, a Conservative MP, said he felt that "the fact that [Lebedev] has been a member of a foreign security service" meant there should be an inquiry into the sale. "I think it's one more example that we are no more a serious nation that we allow a serious paper to be taken over in our capital by a Russian oligarch," harrumphed Sir Peregrine Worsthorne, an octogenarian former newspaper editor.

irish millionaire found dead of suspected suicide
from wikinews: Irish property businessman Patrick Rocca has been found dead in his home. Police reports indicate that suicide is the probable cause. He was 42. Rocca was discovered dead yesterday morning, with one shot to the head. The Irish Times has confirmed that there appears to be no suspicious circumstances surrounding this shot, and that the firearm involved has been confiscated. Rocca was believed to have assets worth €500 million. He had worked in business for around 25 years, since he joined his family business, Rocca Tiles. His first property deal involved the purchase of two Gatwick office blocks in 2005.

over 8 in 10 corporations have tax havens
from ap: Eighty-three of the nation's 100 largest corporations, including Citigroup, Bank of America and News Corp. (NWSA), had subsidiaries in offshore tax havens in 2007, and some of the companies received federal bailout funding, a government watchdog said Friday. The Government Accountability Office released a report that said Bank of America Inc., Citigroup Inc. (C) and Morgan Stanley (MS) all had more than 100 units in countries that maintain low or no taxes. The three financial institutions were included in the $700 billion financial bailout approved by Congress.

update: putin calls for end of dollar stranglehold
from telegraph: Russian prime minister Vladimir Putin has called for concerted action to break the stranglehold of the US dollar and create a new global structure of regional powers. "The one reserve currency has become a danger to the world economy: that is now obvious to everybody," he said in a speech at the World Economic Forum. It is the first time that a Russian leader has set foot in the sanctum sanctorum of global capitalism at Davos. Mr Putin said the leading powers should ensure an "irreversible" move towards a system of multiple reserve currencies, questioning the "reliability" of the US dollar as a safe store of value. "The pride of Wall Street investment banks don't exist any more," he said.

update: diplomat says 'jewish money' controls US
from afp: South Africa’s deputy foreign minister has been taken before the national human rights body for allegedly saying that "Jewish money" controls the United States, officials said Thursday. Fatima Hajaig allegedly told a political rally two weeks ago in Johannesburg that Jews "control America, no matter which government comes into power, whether Republican or Democratic, whether Barack Obama or George Bush... Their control of America, just like the control of most western countries, is in the hands of Jewish money," she allegedly said. Outraged by the remarks, the South African Jewish Board of Deputies — a civil rights group — said it filed a complaint Wednesday against Hajaig at the human rights commission.