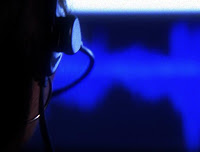 nsa could have prevented 9/11 hijackings

from raw story: The super-secretive National Security Agency has been quietly monitoring, decrypting, and interpreting foreign communications for decades, starting long before it came under criticism as a result of recent revelations about the Bush administration's warrantless wiretapping program. Now a forthcoming PBS documentary asks whether the NSA could have prevented 9/11 if it had been more willing to share its data with other agencies. 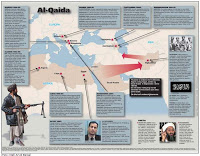 from nafeez ahmed: It came to my attention that a senior correspondent, Kristin Aalen, working for a national Norwegian broadsheet - Stavanger Aftenbladet (Stavanger Evening News) - just recently printed a detailed article in the newspaper on Western covert operations sponsoring al-Qaeda after the Cold War... based almost entirely on my research in The War on Truth: 9/11, Disinformation and the Anatomy of Terrorism. Entitled "Terrorists Working for Western Countries" (24.11.08), it even gives a country-by-country summary breakdown complete with a handy geopolitical world map of the wide arc of these operations. It's a very useful piece from a mainstream national European paper that very effectively summarizes the thrust of my research into this unpalatable subject. A shame that the British press is so reticent about such issues. There are some caveats. Kristin sometimes oversimplifies my geopolitical explanations, and this can lead to serious misinterpretations, such as her rendition of my examination of Pentagon sponsorship of al-Qaeda fighters in the Balkans - she says that the US and NATO helped the Bosnian Muslims against the Serbs, provoking them, and thus preventing peace. This is caricature of my argument, which is more fully fleshed out in The London Bombings: An Independent Inquiry.

from steve watson: According to an article in The London Times today, Société Générale rogue trader Jérôme Kerviel profited enormously on the day of the 7/7 London bombings. He has also revealed how his company made huge profits on September 11th 2001, prompting some to return to questions over insider foreknowledge of both terrorist attacks: “The best trading day in the history of Société Générale was September 11, 2001... At least, that’s what one of my managers told me. It seems that profits were colossal that day... I had a similar experience during the London attacks in July 2005.” Kerviel was charged almost exactly one year ago in the Société Générale trading loss incident which cost the financial services company an estimated €4.9 billion. Until the Bernard Madoff fraud incident last month, it was reported to be the largest fraud in banking history.

yet another military exercise occurring on 9/11 uncovered 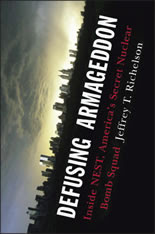 from 9/11 blogger: When it seems impossible to discover additional shady military exercises occurring Sept. 11, 2001, there comes along yet another investigator uncovering secret documents pointing to unprecedented military actions happening the same day.

National Security Archive senior fellow Jeffrey T. Richelson is reporting in his new book, "Defusing Armageddon: Inside NEST, America's Secret Nuclear Bomb Squad," that the U.S. nuclear bomb squad, known as the Nuclear Emergency Search Team, was out of the country on its first foreign deployment since 1998, at a British air base in the Cotswolds, on Sept. 11 as part of Operation Jackal Cave.

According to the book, the exercise involved more than 500 personnel, 62 aircraft, 420 short tons of cargo, the CIA and a special operations force that would seize a mock nuclear device that the NEST squad would disable.

The after-action report from the deployment, ""DOE EXERCISE 03-01 JACKAL CAVE" notes the early termination of the exercise because of the attacks, but finds useful "strengths and weaknesses" including the need to "[i]ssue secure international cell phones to control members and team leaders."

The heavily redacted report created in 2003 and prepared for the Department of Energy's Office of Emergency Response by the Oak Ridge Institute for Science and Education gives only hints of the exercise, including continuing training and exercises between the Department of Energy's Joint Technical Operations Teams (JTOT) and the Army's 21st Ordnance Company (EOD) to "enhance command and control relationships."

A Sept. 13, 2001 report by the BBC News Online quotes British Squadron Leader John Morris of Royal Air Force station Fairford that U.S. planes were flying to the station after being recalled from their participation in Operation Jackal Cave.

Morris is also quoted in a story printed in the Swindon Advertiser in South West England in an article dated Aug. 30, 2001 in which he describes RAF Fairford, a former wartime base, hosting a major United States European Command sponsored training exercise between September 5 and 18. Morris said Fairford would be used as a transit point for the exercise. 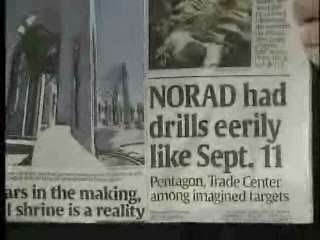 from 9/11 blogger: In the aftermath of the September 11, 2001 attacks, senior U.S. government and military officials repeatedly claimed that what happened that day was unexpected. In May 2002, National Security Adviser Condoleezza Rice said, "I don't think anybody could have predicted that these people would take an airplane and slam it into the World Trade Center, take another one and slam it into the Pentagon; that they would try to use an airplane as a missile, a hijacked airplane as a missile." [1] Two years later, President Bush stated, "Nobody in our government, at least, and I don't think the prior government, could envision flying airplanes into buildings on such a massive scale." [2] General Ralph Eberhart, the commander of NORAD on September 11, said, "Regrettably, the tragic events of 9/11 were never anticipated or exercised." [3]

Yet these claims were untrue. Not only had the U.S. military and other government agencies discussed the possibility of such attacks, they also conducted numerous training exercises in the year or two before September 11 based around scenarios remarkably similar to what occurred on 9/11. As John Arquilla, a professor of defense analysis at the Naval Postgraduate School in Monterey, California, said, "No one knew specifically that 20 people would hijack four airliners and use them for suicide attacks against major buildings ... but the idea of such an attack was well known [and] had been wargamed as a possibility in exercises before September 11." [4]

The existence of these training exercises proves that official claims that the events of September 11 were unimaginable have been false. However, future investigations of 9/11 will need to determine whether these exercises served a more nefarious purpose. For example, might they have been intended as a smokescreen for rogue individuals working within the military and other government agencies who were involved in planning the attacks? Thus, if colleagues overheard these individuals discussing matters such as planes hitting the World Trade Center or crashing into the Pentagon, they could have claimed they were simply talking about a forthcoming training exercise.