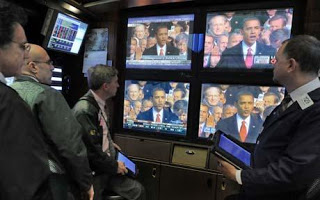 from bloomberg: Executives at Goldman Sachs Group Inc., JPMorgan Chase & Co. and hundreds of financial institutions receiving federal aid aren’t likely to be affected by pay restrictions announced yesterday by President Barack Obama. The rules, created in response to growing public anger about the record bonuses the financial industry doled out last year, will apply only to top executives at companies that need “exceptional” assistance in the future. The limits aren’t retroactive, meaning firms that have already taken government money won’t be subject to the restrictions unless they have to come back for more.

scandinavian airlines system to cut 8,600 jobs
from wikinews: Sweden-based airline Scandinavian Airlines System (SAS) said it will reduce payrolls by 8,600 jobs as part of its "Core SAS" restructuring plan. The airline will cut 3,000 staff directly and eliminate 5,600 by divesting business ventures, reducing the workforce by 40% to 14,000.

macy’s to cut 7,000 jobs & slash dividends
from ap: Retailer Macy’s says it will cut 7,000 jobs, or four percent of its work force, and slash its dividend as it looks to lower expenses. Cincinnati-based Macy’s Inc. says the work force reduction includes positions in offices, stores and other locations. The cuts will include some unfilled jobs.

panasonic to cut 15k jobs & shut plants
from ap: Panasonic Corp., sinking into its first annual loss in six years, said Wednesday it was slashing about 15,000 jobs and shuttering 27 plants worldwide, joining a string of Japanese companies making deep cuts as they cope with the global slowdown.

ibm invites laid-off US employees to work in india
from raw story: Redefining the possibilities of the word "offshore," IBM has invited its recently laid-off U.S. workers to find work with the storied company in developing countries like India – where salaries are a fraction of what Americans are used to. While the invitation is likely more than most U.S. companies have offered the 2.6 million Americans laid off in 2008, the company's standing offer is probably cold comfort to most newly minted ex-IBM employees.

anthrax hoax linked to market losses
from washington times: A New Mexico man sent dozens of threatening letters in an anthrax hoax to Chase Bank and government agencies as revenge for money he said he lost in the stock market because of the current financial crisis, prosecutors said Tuesday. Richard Leon Goyette, 47, was arrested Monday on charges of sending 65 threatening letters, 64 of which contained a white powder that was later determined to be nonhazardous.