from oregonian: You may not realize it, but the Navy has been conducting warfare training exercises off the coast of Oregon, Washington and Northern California for decades, firing missiles and machine guns, dropping bombs and practicing crucial sonar detection of submarines. Now, the Navy's Northwest region wants to expand those operations, including adding a dummy minefield-avoidance training course, scheduling hundreds more training flights and warfare simulations over land and sea, and increasing the use of sonar - a potential threat to endangered and threatened whales and other marine mammals. 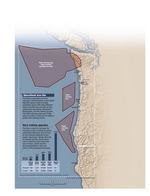 Environmental groups, fishermen and some politicians along Oregon's coast are wary. They also say the military sprang the 1,000-page environmental review of its training plan with little notice. The Navy held one Oregon meeting on the draft proposal last week, and comments are due Wednesday. But activists want a 30-day extension. "For the whole state of Oregon, there was one 90-minute hearing," said Marie Gargano, a Depoe Bay retiree active in environmental issues. "It just looks like a pro-forma effort to meet the requirements of the law."

related: 10yrs ago, saga of the new carissa began on oregon coast
from katu: The wood chip freighter New Carissa ran aground off the coast of Oregon on Feb. 4, 1999, the start of what was heralded at the outset as a straightforward salvage job - and turned into a nearly decade-long shipwreck saga featuring explosions, lawsuits and cable cars.