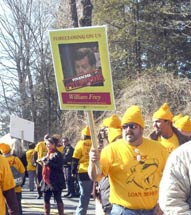 this is all starting to sound like a bad country song...
economist says hoard gold & scotch

outrage brewing in oregon over proposed 1900% beer tax
from kgw: Five Oregon state lawmakers want to impose a hefty tax on beer and have introduced a bill that brewers say would cripple them. Four Portland legislators joined a Springfield senator to introduce Oregon House Bill 2461 [32kb PDF], which would impose a $49.61 tax on each barrel of beer produced by Oregon brewers. The tax would raise revenue for the state at a time when budgets are running in the red. Specifically, the bill says it would fund prevention, treatment and recovery programs for those addicted to alcohol and other substances.

kansas suspends income tax refunds
from wichita eagle: Income tax refunds and state employee paychecks could be late after Republican leaders and the Democratic governor clashed Monday over how to solve a cash-flow problem. Payments to Medicaid providers and schools also could be delayed. "We are out of cash, in essence," state budget director Duane Goossen said.

bbc shills for a cashless society
from bbc: Consumers in the UK should expect a revolution in the way they pay for things in the near future, according to payments association Apacs. The cheque, which is 350 years old on 16 February, is said to be in irreversible decline as innovation points towards a cashless society. Banks will increasingly battle for a consumer to use one card exclusively. But as consumers prepare to pay and access accounts using their mobiles, retailers are worried costs will rise.

US intelligence chief sees economic peril as major threat
from dpa: The top US intelligence official warned Thursday that the global economic crisis has evolved into a major threat to US interests in the world. Dennis Blair, director of national intelligence, told a Senate committee that the economic crisis threatens to destabilize governments in less developed countries friendly to the United States and could curtail NATO support for the conflict in Afghanistan. "The primary near-term security concern of the United States is the global economic crisis and its geopolitical implications," the new intelligence chief said. "The crisis has been ongoing for over a year, and economists are divided over whether and when we could hit bottom."

pennsylvania judges accused of jailing kids for cash
from ap: For years, the juvenile court system in Wilkes-Barre operated like a conveyor belt: Youngsters were brought before judges without a lawyer, given hearings that lasted only a minute or two, and then sent off to juvenile prison for months for minor offenses. The explanation, prosecutors say, was corruption on the bench. In one of the most shocking cases of courtroom graft on record, two Pennsylvania judges have been charged with taking millions of dollars in kickbacks to send teenagers to two privately run youth detention centers.

video: rep says $550b disappeared in 'electronic run on the banks'

even elderly are facing eviction

from raw story: If these activists are as dedicated as they are desperate, expect this to become a trend. Monday, a group of 350 to 400 at-risk homeowners, organized by the Neighborhood Assistance Corporation of America, staged a series of protests outside the mansions of wealthy bankers in a moneyed Connecticut neighborhood. "Called the 'Predators Tour' these actions were the start of NACA's 'accountability campaign,' an aggressive, confrontational protest aimed at several top executives of companies that refuse to allow NACA to renegotiate the terms of loans on behalf of members, according to NACA CEO Bruce Marks," reported the Stamford Times. "Sporting bright yellow shirts that read, 'Stop Loan Sharks,' protesters demanded more accountability from the CEOs of the financial institutions responsible for the millions of unaffordable mortgages in the state and across America," reported NBC New York in an article titled, "Grab Your Torch and Pitchfork."

new world order for the economy 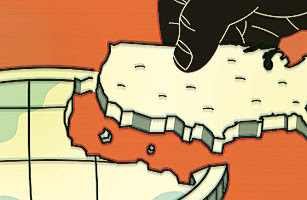 'there are more shady deals going on behind closed doors'

peter schiff: this is just the beginning

update: dow ends at lowest close in more than 6yrs
from ap: An important psychological barrier gave way on Wall Street Thursday [feb19] as the Dow Jones industrials fell to their lowest level in more than six years. The Dow broke through a bottom reached in November, pulled down by a steep drop in key financial shares. It was the lowest close for the Dow since Oct. 9, 2002, when the last bear market bottomed out.