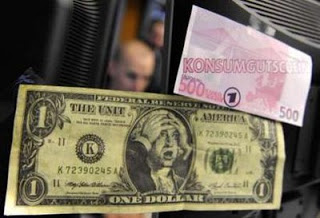 video: the elite are turning a recession into a depression

from paul joseph watson: Veteran investor Jim Rogers warns that the policies of central banks and politicians are turning what would have been a recession into a new great depression, and that Barack Obama’s taxation agenda will only make the problem much worse. Speaking to Bloomberg News, Rogers said that the crisis would at least be the worst since the second world war and that “it could well be” as bad as the great depression. “1929 was the stock market bubble which popped, we were going into a recession and then the politicians around the world starting making horrendous mistakes which turned it into a depression, it would have been just a normal recession otherwise but the American politicians and the European politicians - everyone got in on the act and that seems to be happening this time too,” said Rogers.

video: crash will be worse than great depression
from truthnews: Interview with Nassim Nicholas Taleb, famous economist and author of “The Black Swan” and Dr. Mandelbrot, professor of Mathematics. Both say that the present economic situation is far more serious than the Great Depression and the economy during the American Revolution.

secrecy surrounds those receiving federal reserve’s trillions
from the age: The Fed is refusing to speak, raising fears that things could end in the deepest of depressions. Of the many elephants cluttering the denial room of extremely high finance in the US, the daddy of them all, the veritable woolly mammoth, remains undisturbed. The Federal Reserve has formally refused a request by Bloomberg News that would have poked the sleeping giant. It didn't raise a tusk. Bloomberg has taken on the task abrogated by the rest of the US financial media to keep the bastards — if not honest — aware they are being watched.

madoff investor found dead
from nypost: A French financial executive whose firm lost a bundle in Bernard Madoff's massive Ponzi scheme killed himself this morning in his Midtown Manhattan office, cops said. The exec, 65-year-old Thierry Magon de la Villehuchet, was found dead at around 8 a.m. with razor cuts to his arms, and with sleeping pills nearby in an office building at 509 Madison Ave., law enforcement sources said. That address is home to Acccess International Advisors, which de la Villehuchet co-founded.

US army ready if the downtown gets out of hand
from nypost: Are you afraid that the economic downturn could get out of hand? I mean, really out of hand? Well, don't worry. The US Army War College is on the case - ready to handle "unforeseen economic collapse" and the "rapid dissolution of public order in all or significant parts of the US." And you thought we were just dealing with a recession! In a report published Nov. 4 - just in time for the holiday season - the War College's Strategic Studies Institute posited a number of shocks that the country should be prepared for, including unrest caused by the economy's failure.

the federal reserve abolition act
from global research: On June 15, 2007, Ron Paul introduced HR 2755: Federal Reserve Abolition Act. There were no co-sponsors, no further action was taken, and the legislation was referred to the House Committee on Financial Services and effectively pigeonholed and ignored. It's a bold and needed measure to "abolish the Board of Governors of the Federal Reserve System and the Federal reserve banks, to repeal the Federal Reserve Act, and for other purposes." The bill provides for management of employees, assets and liabilities of the Board during a dissolution period, and more...

cash-strapped states weigh selling roads & parks
from ap: Minnesota is deep in the hole financially, but the state still owns a premier golf resort, a sprawling amateur sports complex, a big airport, a major zoo and land holdings the size of the Central American country of Belize. Valuables like these are in for a closer look as 44 states cope with deficits. Like families pawning the silver to get through a tight spot, states such as Minnesota, New York, Massachusetts and Illinois are thinking of selling or leasing toll roads, parks, lotteries and other assets to raise desperately needed cash.

we are not headed for great depression II