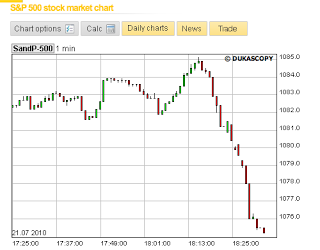 Video: Competing currency being accepted in Michigan
from connect mid-michigan: New types of money are popping up across Mid-Michigan and supporters say, it's not counterfeit, but rather a competing currency. Right now, you can buy a meal or visit a chiropractor without using actual U.S. legal tender. They sound like real money and look like real money. But you can't take them to the bank because they're not made at a government mint. They're made at private mints. "I sell three or four every single day and then I get one or two back a week," said Dave Gillie, owner of Gillies Coney Island Restaurant in Genesee Township. Gillie also accepts silver, gold, copper and other precious metals to pay for food. He says, if he wanted to, he could accept marbles. "Do people have to accept dollars or money? No, they don't," Gillie said. "They can accept anything they want or they can refuse to accept anything." He's absolutely right. The U.S. Treasury Department says the Coinage Act of 1965 says "private businesses are free to develop their own policies on whether or not to accept cash, unless there is a state law which says otherwise."

Half of US have less than $2k banked for 'retirement' 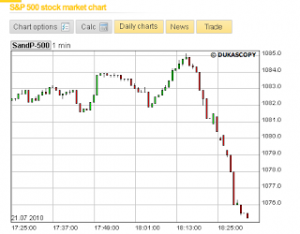 from of goats and men: This is the S&P chart. The red dive down occurs during Bernanke's testimony today. (the chart is from the UK so times are different) Go here for live viewing of Bernanke as he talks about depression, bad outcomes, etc...

Obama signs 'sweeping financial overhaul' into law
from ap: Reveling over a new milestone in his presidency, a triumphant Barack Obama on Wednesday signed into law the most sweeping overhaul of lending and high-finance rules since the Great Depression, adding safeguards for millions of consumers and aiming to restrain Wall Street excesses that could set off a new recession... The new rules, however, are only at a midpoint. Banking and market regulators will have up to two years to write many of the new regulations required by the law, extending uncertainty and ushering in a new phase of lobbying by financial firms. "Regulators will have to be vigilant," Obama said. The president sought to quell public anger over the $700 billion bank rescue fund the government created at the height of the crisis to reassure the markets. While the infusion is credited with providing stability, the public recoiled at the idea of taxpayer money being used to help prop up huge banks. The law gives regulators new authority to liquidate large, interconnected financial firms that are failing. "Because of this law, the American people will never be asked again to foot the bill for Wall Street's mistakes," Obama said. "There will be no more tax-funded bailouts, period." 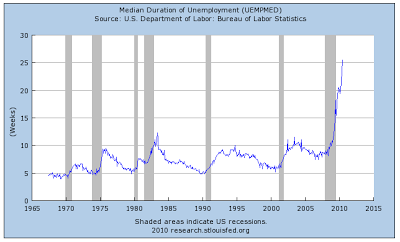 US financial bailout figure hits $3.7t*
Prominent hedge fund manager's Idaho ranch:
"It would be a place you could hole up in"*
'Darth Vader' robs NY bank*