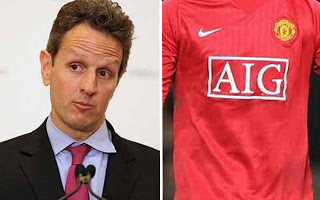 sec engages in conspiracy with aig to hide bailout evidence

from kurt nimmo: Earlier today House representative Edolphus Towns subpoenaed documents related to the so-called “backdoor bailout” of AIG, including documents from Timothy Geithner, the former New York Fed chief and current Treasury secretary. The House Oversight and Government Reform Committee is looking for information on payments made to AIG counterparties, including Goldman Sachs, Morgan Stanley, Barclays, Bank of America, Deutsche Bank, and Societe Generale. The subpoena “specifically requests all documents surrounding the decision to pay AIG’s counterparties 100 cents on the dollar,” according to AFP.

It looks like Towns and his committee may only get part of the story. They will have to wait until 2018 to get the rest.

In May, well before Geithner was on the hot seat, the Securities and Exchange Commission approved a request by AIG to keep secret an exhibit to a year-old regulatory filing that includes some of the details on the most criminal aspect of the AIG bailout — the funneling of billions of dollars to the above mentioned culprits, particularly Goldman Sachs.

The SEC said the exhibit “qualifies as confidential commercial or financial information” and is off limits to Congress and the American people. The 2018 expiration date will fall on the tenth anniversary of the Federal Reserve of New York’s decision to provide “emergency financing” to an entity set up to specifically acquire some $60 billion in collateralized debt obligations from 16 banks in the United States and Europe.

The SEC ruling is yet another indication the banksters have a lot to hide and will go to unusual lengths to prevent the American people from learning the sordid details of their criminal activities.

related updates:
move your money dot info: get out of the big banks*
video: in 2009, the federal reserve bought 80% of US debt?!*
federal reserve makes record $52b profit*
the military-industrial complex is ruining the economy*
video: jp morgan largest provider of food stamps in US*
goldman email lays bare trading conflicts*
irs commissioner doesn't file his own taxes*
grayson takes on corporate campaign spending*
if govt won't break up the giant banks, let's do it ourselves*
economics 101: ellen brown on the tobin tax*