Ecuadorans Take To The Streets To Dance With The Devil 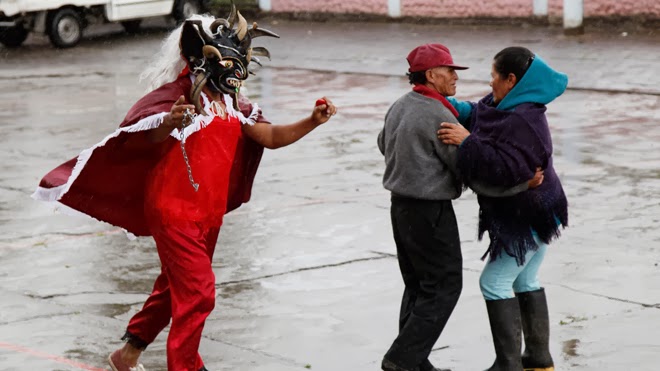 from latino.foxnews.com: Thousands of Ecuadorans in elaborate devil masks and red costumes danced wildly in the streets of this Andean town in the “La Diablada de Pillaro,” or the Devils of Pillaro festival. Neither the rain showers nor the highland sun could stop the days of revelry in Pillaro, located 100 kilometers (62 miles) south of the capital Quito, where children, men and women all joined the celebration in homemade costumes, scaring tourists and passersby. One version says the festival, which runs from Dec. 28 to Jan. 6, began in the 1940s when the mainly farming families of Pillaro would gather at the end of the year to discuss their lives. The meetings would extend late into the night and end in tales of devils and souls in pain. Townsfolk decided to honor the scary tales by forming dancing groups and the custom developed into La Diablada celebration of wildly dancing and howling demons.