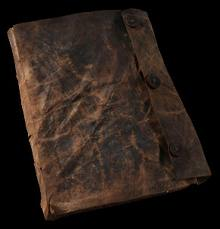 from phys.org: From 2010: “Irish scientists have found fragments of Egyptian papyrus in the leather cover of an ancient book of psalms that was unearthed from a peat bog, Ireland’s National Museum said on Monday.

The papyrus in the lining of the Egyptian-style leather cover of the 1,200-year-old manuscript, “potentially represents the first tangible connection between early Irish Christianity and the Middle Eastern Coptic Church”, the Museum said.

“It is a finding that asks many questions and has confounded some of the accepted theories about the history of early Christianity in Ireland.”

Raghnall O. Floinn, head of collections at the Museum, said the manuscript, now known as the “Faddan More Psalter”, was one of the top ten archaeological discoveries in Ireland.

It was uncovered four years ago by a man using a mechanical digger to harvest peat near Birr in County Tipperary, but analysis has only just been completed.

O. Floinn told AFP the illuminated vellum manuscript encased in the leather binding dated from the eighth century but it was not known when or why it ended up in the bog where it was preserved by the chemicals in the peat.

“It appears the manuscript’s leather binding came from Egypt. The question is whether the papyrus came with the cover or if it was added.”

“It is possible that the imperfections in the hide may allow us to confirm the leather is Egyptian.
“We are trying to track down if there somebody who can tell us if this is possible. That is the next step.”

O. Floinn said the psalter is about the size of a tabloid newspaper and about 15 percent of the pages of the psalms, which are written in Latin, had survived. The experts believe the manuscript of the psalms was produced in an Irish monastery and it was later put in the leather cover.
“The cover could have had several lives before it ended up basically as a folder for the manuscript in the bog,” O. Floinn said.

“It could have travelled from a library somewhere in Egypt to the Holy Land or to Constantinople or Rome and then to Ireland.”

The National Museum in Dublin plans to put the psalter on public display for the first time next year.