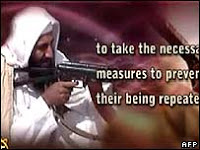 from ap: Al-Qaida leader Osama bin Laden will be issuing a new message timed to the fifth anniversary of the U.S.-led invasion of Iraq, a militant Web site with close connections to the group said Wednesday.

"Urgent, very soon by the will of God," read the announcement of the new message "the response is what you see and not what you hear, by the warrior sheik, Osama bin Laden."

Iraq marked the fifth anniversary of the war on Wednesday.

The announcement was text only and showed no pictures of the elusive militant leader.

The message would be bin Laden's first for 2008 and follows up an hour-long, late December audio missive in which he warned Iraq's Sunni Arabs against fighting al-Qaida in Iraq and vowed new attacks on Israel.

from bbc: In a new audio message purportedly from Osama bin Laden, the al-Qaeda leader threatens the EU over the re-printing of a cartoon offensive to Muslims... The voice on the audio has not yet been verified as belonging to bin Laden.

update2: bin laden tape voice 'authentic'
from bbc: US intelligence agents believes the voice on a tape purportedly from Osama Bin Laden was authentic, the CIA and White House have said... "It can be said with a high degree of confidence that it is in fact the voice of Osama Bin Laden," a CIA official told Reuters news agency.