israel to hold its largest-ever wargames
from jerusalem post: In the face of a possible escalation with Syria and Iran's efforts to obtain a nuclear weapon, parts of the country will shut down next month in what security officials say will be the largest emergency exercise in Israel's history. The drill, which is being organized by the newly-established National Emergency Authority, will take place over five days starting on Sunday, April 6.

from ria novosti: Russian Tu-95MS Bear strategic bombers will conduct exercises in Russia's Far East on March 20-22, the Air Force said in a statement on Wednesday. "Crews of an air regiment, equipped with Tu-95MS bombers, will participate in planned flight drills and long-range patrols over the Pacific," the statement said.

from wustl: University administrators, St. Louis Department of Health officials and more than 200 campus volunteers collaborated in a public health drill Tuesday that simulated the distribution of medication at Mallinckrodt in the event of a terrorist anthrax attack, and tested the University's emergency text-message system. "We have protocols in place for a public health event, but we've never tried them and we haven't trained a lot of people," said Mark Bagby, the University emergency coordinator.

hhs includes online services in pandemic communication drill
from cidrap: The US Department of Health and Human Services (HHS) recently held a tabletop exercise to assess how it could best work with the news media - including blogs and other online-only information sources... Representatives from online avian-flu information services such as Avian Flu Diary, FluTrackers, FluWiki, WebMD, and CIDRAP News participated in the exercise along with those from several national media organizations, including ABC News, National Public Radio, and Reuters.

eco-terror scenario plays out at the port

from vancouver sun: At 6:30 a.m. Monday morning a radiation signature was detected in a shipping container at the Port Vancouver. Just after noon an improvised bomb containing radioactive material exploded leaving a dozen people injured and contaminated. This scenario was cooked up by the federal Centre for Security Science to let federal and local emergency personnel practice for a real bioterror attack. 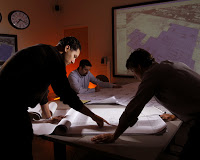 from contra costa times: Like a bioterror crisis hotline, a new center in Livermore has become the nerve center for responding to the intentional or accidental release of a dangerous biological agents at public facilities across the country. Sandia/California National Laboratories in Livermore will be at the other end of calls from managers of high-profile transportation hubs, such as airports, and other public places, ready to give critical information to help them deal with biohazards.

mass casualty exercise to be held march 20th
from daily press: Fort Monroe will hold a mass casualty exercise from 9 a.m. to 3 p.m. Thursday with local fire, police and medical response departments. "The exercise scenario will involve multiple casualties from a major traffic accident," according to a Fort Monroe news release. Traffic in and around the Hampton Army base will be "significantly impacted" in the late morning, lunch time and early afternoon portions of the exercise.

US pandemic flu plan would put chicago on lockdown
from reuters: Containing an influenza pandemic in a large U.S. city like Chicago would require widespread school closings, quarantines of infected households and bans on public gatherings, U.S. researchers said on Monday. But, if done quickly and well, such steps could reduce infections by as much as 80 percent, said researcher Stephen Eubank of Virginia Tech in Blacksburg, Virginia, based on a computer simulation of just such an event. 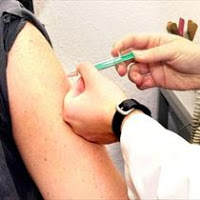 from wetm-tv: Some people say they don't think the government is well-prepared when it comes to a disease outbreak or bio-terrorism event. "I don't have much trust right now in our government and how they would respond to things," remarked Deborah Young of Bradford County. "I know they're catching a lot, but they're missing a lot too." That's why Bradford County is practicing its Mass Medication Plan, in connection with the North Central Pennsylvania Regional Counter-Terrorism Task Force. The plan is known as the Strategic National Stockpile, or SNS Plan.

new name for masint, details emerge about futuristic spy tech
from gcn: The intelligence agencies have renamed their MASINT program and will now refer to the recondite spy discipline as the Advanced Technical Exploitation Program (ATEP). The name change surfaced in documents that describe a pending acquisition for contractor assistance in merging information from various types of sensors and systems to create cross-disciplinary intelligence. 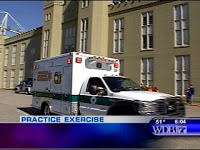 from wdbj: First responders from more than a dozen agencies gathered at VMI today to prepare for a large-scale emergency. VMI has been planning for a wide variety of natural and man-made disasters. Monday's exercise was a chance to bring together the outside agencies that would respond in the event of a large-scale emergency... SWAT team members secured the barracks in today's exercise. Emergency crews followed to deal with a large number of casualties. More than 60 people participated in the drill that also included Carilion Stonewall Jackson Hospital.