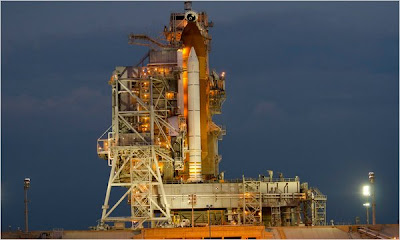 from usa today: The space shuttle Endeavour stood poised for its final launch Sunday on Kennedy Space Center's launch pad 39A. Endeavour, with a crew of six astronauts, is scheduled to blast off this morning at 8:56 on NASA's next-to-last shuttle mission. NASA officials said Sunday that conditions — from weather to technical issues - couldn't look much better. Rep. Gabrielle Giffords, D-Ariz., the critically wounded wife of mission commander Mark Kelly, arrived Sunday at Kennedy Space Center, her staff reported... Her staff says she will not make any public appearances. Her launch viewing location has not been disclosed. The staff plans to hold a press conference after the launch. President Obama, who came for the initial launch try, will not attend. He will be in Memphis visiting residents flooded out of their homes.

Joining Kelly on the 16-day trip to the International Space Station are pilot Greg Johnson and mission specialists Greg Chamitoff, Drew Feustel, Mike Fincke and Roberto Vittori of the European Space Agency. Endeavour's grand finale is a 16-day mission to deliver a $2 billion cosmic ray detector to the space station. Also flying in the shuttle's expansive cargo bay: a pallet of large spare parts that will help keep the outpost operating through at least 2020. The flight is Endeavour's 25th since a maiden voyage 19 years ago this month. The youngest shuttle orbiter was built after Challenger and its crew were lost in 1986. The Endeavour mission faces schedule challenges as a result of the two-week slip. The delay knocked the work schedules of the shuttle and station crews out of sync.