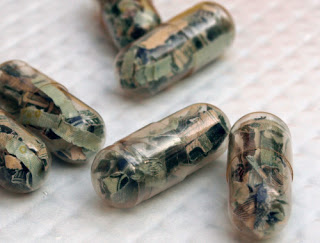 from ecochildsplay: A five year probe of Forest Laboratories by the U.S. Justice Department into illegal marketing of Lexapro to children has an ironic twist to it: The FDA just approved the use of Lexapro for depression in children. “Federal health care programs have paid thousands of false and fraudulent claims for Celexa and Lexapro prescriptions that were not covered for off-label pediatric use and/or were ineligible for payment as a result of illegal kickbacks paid by Forest.” On February 25, the Justice Department accused Forest of bribing pediatricians to prescribe Celexa and Lexapro with things like spa visits, sports tickets, Broadway shows, and fishing trips. On Friday, the Food and Drug Administration gave the go-ahead to use Lexapro to treat depression in adolescents aged 12 to 17. Federal prosecutors say Celexa is not any more effective for children or teenagers than taking a placebo, and more patients taking Celexa attempted suicide or reported suicidal thoughts.

video: pharmaceuticals found in fish across US 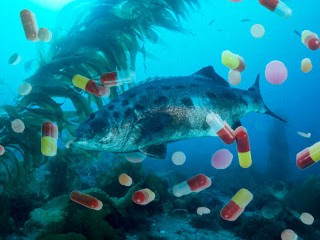 from ap: Fish caught near wastewater treatment plants serving five major U.S. cities had residues of pharmaceuticals in them, including medicines used to treat high cholesterol, allergies, high blood pressure, bipolar disorder and depression, researchers reported Wednesday [mar25]. Findings from this first nationwide study of human drugs in fish tissue have prompted the Environmental Protection Agency to significantly expand similar ongoing research to more than 150 different locations. "The average person hopefully will see this type of a study and see the importance of us thinking about water that we use every day, where does it come from, where does it go to? We need to understand this is a limited resource and we need to learn a lot more about our impacts on it," said study co-author Bryan Brooks, a Baylor University researcher and professor who has published more than a dozen studies related to pharmaceuticals in the environment.

vet admin put 1000s of vets at risk of hiv infection
from usatoday: Thousands of veterans who underwent certain routine medical procedures at Miami's VA Medical Center since 2004 are at risk of being infected with hepatitis or HIV, The Miami Herald reports. John Vara, the center's chief of staff, says the risk of infection is low, but that "any risk is unacceptable," the newspaper reports. It was discovered three weeks ago that some water pumps used during colonoscopies and gastrointestinal procedures were being rinsed but not disinfected, The Herald says. This, Vara says, creates the slight chance that back-flow from the pumps could lead to serious or potentially deadly infections.

germ warfare porton down vets 'died early'
from skynews: More than 300 armed forces veterans who volunteered as human guinea pigs at military labs have died earlier than expected, according to the British Medical Journal. The journal has published the first long-term health survey into the controversial germ warfare work at Porton Down, near Salisbury in Wiltshire. The BMJ reports that, among 18,276 men who took part in experiments spread over 63 years, death rates were 6% higher than among a similar group who did not. Last year, the Government agreed to pay £3m in compensation to a group of 369 veterans who sued over claims their health had been affected by deliberate exposure to nerve gases and other toxins. Further legal claims are being prepared. But the MoD-funded survey found no increase in cancer rates among those who had taken part in the tests. Nor were scientists able to link premature deaths to the experiments. "The research team did not have access to information on potentially influential factors like whether veterans smoked," the BMJ said. "As a result, they could not attribute these findings to participation in the Human Volunteer Programme at Porton Down." Tests began at the Wiltshire research establishment after World War One. It became the world's longest-running programme of chemical weapons testing on humans. Records show that between 1941 and 1989 almost 500 different chemicals were used, including blistering weapons, like mustard gas, and nerve agents, including sarin. Volunteers say they were told they were helping find a cure for the common cold.