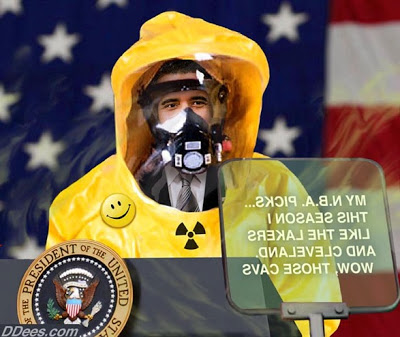 govt responds to nuclear accident by trying to raise acceptable radiation levels & pretending that radiation is good for us...

from activist post: As Americans focus on March Madness and Dancing With the Stars instead of the radioactive plume spreading all across the country, the US EPA (Environmental Protection Agency) is attempting to make the mainstream media cover up of the Fukushima cloud a bit easier.

The agency now notorious for its infamous claim that the air was safe to breathe after 9/11 is now seeking to raise the PAGs (Protective Action Guides) to levels vastly higher than those at which they are currently set allowing for more radioactive contamination of the environment and the general public in the event of a radioactive disaster...

According to PEER (Public Employees for Environmental Responsibility), the new standards would drastically raise the levels of radiation allowed in food, water, air, and the general environment. PEER, a national organization of local, state, and federal employees who had access to internal EPA emails, claims that the new standards will result in a “nearly 1000-fold increase for exposure to strontium-90, a 3000 to 100,000-fold hike for exposure to iodine-131; and an almost 25,000 rise for exposure to radioactive nickel-63” in drinking water. This information, as well as the emails themselves were published by Collapsenet on March 24...

As of the time of this writing, a toxic cloud of radiation has not only reached the US West Coast, but has spread all the way across the country to states like South Carolina, North Carolina, Florida, and Massachussetts. Both the US government and the mainstream media have largely denied any risk associated with the radiation and have actively engaged in covering up the extent to which it has spread across the country.