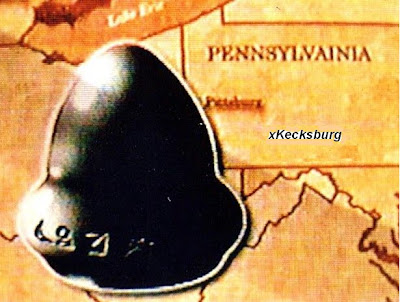 At 4:45pm on December 9, 1965, many reports of a fireball flooded phones at WHJB radio in nearby Greenburg, PA. Robert Gatty wrote the following story that appeared in the Tribune-Review the next morning, "Unidentified Flying Object Falls near Kecksburg — Army Ropes off Area," Authorities informed residents at the site, it was a meteor crash. By the next day, both, local authorities and the US government denied anything fell and nothing found! Stan Gordon, a 16-year old in 1965 and riveted to radio and TV coverage, marked a beginning of four decades of research into the Kecksburg incident.

Gordon provides perhaps the best description of the object. "...large enough for a man to stand inside of it. The object was a bronze-gold color, and appeared to be one solid piece of metal, displaying no rivets or seams. At the back of the acorn shape was..the bumper area.  Upon this area were unusual markings that..looked similar to ancient Egyptian hieroglyphics."

The following conclusions are made by Gordon after extensive interviews, "based on the accounts of multitudes of eyewitnesses which I have interviewed, I am convinced that an object did fall from the sky and apparently was removed by the military. Other witnesses say they saw NASA personnel at the scene that night also involved in the search".

A Sightings episode covers "bitter controversy" of a coverup and animosity between believers and non-believers in the Kecksburg UFO. There are professionals who argue for a meteor, "The Fireball of December 8, 1965-Part I," and others such as James Oberg argue debris from Kosmos 96, a failed Russian satellite.

Leslie Kean, an investigative reporter, provides a recent summary of the Kecksburg controversy, "Forty Years of Secrecy: NASA, The Military and the 1965 Kecksburg Crash