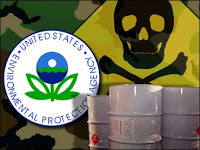 from cbs/ap: The Environmental Protection Agency has decided there is no need to rid drinking water of a toxic rocket fuel ingredient that has fouled public water supplies around the United States. EPA reached the conclusion in a draft regulatory document not yet made public but reviewed Monday by The Associated Press.

The ingredient, perchlorate, has been found in at least 395 sites in 35 states at levels some scientists say could interfere with thyroid function and pose developmental health risks, particularly for babies and fetuses.

The EPA document says that mandating a cleanup level for perchlorate would not result in a "meaningful opportunity for health risk reduction for persons served by public-water systems."

The conclusion, which caps years of dispute over the issue, was denounced by Democrats and environmentalists who accused EPA of caving in to pressure from the Pentagon.

update: US to regulate rocket fuel chemical in water