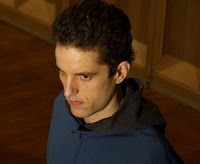 from ap: An American Soldier who fled to Canada after learning his unit was being deployed to Iraq won a last-minute stay of deportation Sept. 22.

Federal Court Judge Richard Mosley ruled Jeremy Hinzman can stay in Canada while the court decides whether he can appeal his deportation order.

"We're elated," Hinzman said moments after the decision was released. "(But) we're not out of the woods at all. We just have a stay of removal."

Hinzman, 29, who holds the rank of specialist, was due to be deported today to the United States, where he is charged with fleeing to avoid duty in Iraq. He had served a tour in Afghanistan during his three years in the Army, but argues the Iraq war is immoral and illegal.

from ap: A soldier was detained in Iraq after he allegedly opened fire on a superior and another unit member, killing them both, the Army said Wednesday.

The soldier was subdued by other troops, and medics tried unsuccessfully to save the wounded soldiers, said Maj. Gen. Anthony Cucolo, commanding general at Fort Stewart in southern Georgia, where the soldiers’ unit is based.

An Army spokesman said the shooting happened Sunday in Tunnis, Iraq. The slain soldiers and the alleged shooter, whose name was not released, belong to the 4th Brigade Combat Team of the 3rd Infantry Division.

“We also know the accused is in custody — in control of military authorities in theater for now — and the investigation is under way,” Cucolo said in a release that gave few other details.