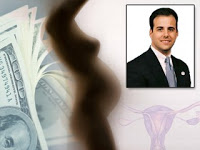 from thinkprogress: Louisiana State Rep. John LaBruzzo (R) recently stirred controversy by advocating a form of eugenics to decrease the number of poor. “I realized that all these people were in Louisiana’s care and what a massive financial responsibility that is to the state,” he said. “I said, ‘I wonder if it might be a good idea to pay some of these people to get sterilized.’” His plan would also give tax incentives to the rich to encourage procreation. Appearing on CNN today, LaBruzzo defended his proposal by arguing that “the taxpayers of America are kind of getting fed up” with supporting welfare programs. He cited the “totally reliant” residents who relied on government evacuations during Hurricane Katrina. When CNN’s Kyra Phillips asked why he couldn’t invest in education and poverty-reduction programs, LaBruzzo faulted the media for focusing too much attention on his eugenics program.

But this week, LaBruzzo explicitly ruled out more common sense solutions. “LaBruzzo said other, mainstream strategies for attacking poverty, such as education reforms and programs informing people about family planning issues, have repeatedly failed to solve the problem,” the Times-Picayune reported. LaBruzzo seems to be dead serious about implementing the plan. He “gathering statistics” now and is planning to introduce legislation “if he finds that the number of people on welfare has increased” over the past decades.

none dare call it eugenics!

magazine promotes sterilization for women in their 20’s 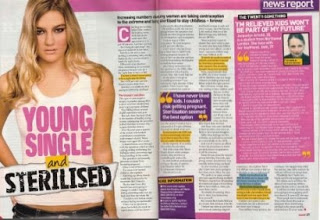 from paul joseph watson: A popular women’s magazine in the UK recently featured an article entitled, Young, Single and Sterilized, in which women in their 20’s discussed why they had undergone an operation to prevent them from ever having children. The article is little more than PR for a “women’s charity” called Marie Stopes International, an organization that carries out abortions and sterilizations and was founded by a Nazi eugenicist who advocated compulsory sterilization of non-whites and “those of bad character”. The story appears in a weekly magazine called Love It (click for PDF enlargement). One of the women featured in the article, Chloe, explains why she decided to have herself sterilized at the age of just 20.

33 disturbing but true facts about eugenics

planned parenthood accused of 'genocide' on blacks since 1921
from memphis rap: A "genocide on the black community," is what a group of African-American pastors is saying about The Planned Parenthood Federation of America. According to the pastors and other activists, the birth control center and abortion provider has had a racist agenda since its beginnings in 1921. "Every day … over 1,500 black babies are murdered inside the black woman’s womb," said Rev. Jesse Lee Peterson, of Brotherhood Organization of a New Destiny (BOND) and, according to Peterson, there "is a race issue." The group held a press conference in front of a Planned Parenthood clinic in Washington, D.C. and stated that they are angry at results of recent "undercover" inquiries into several Planned Parenthood clinics across the country. 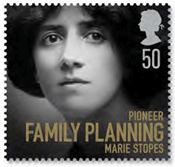 from lifesite: Marie Stopes, the notorious early 20th century contraception campaigner, eugenicist and anti-Semite, did for Britain what Margaret Sanger did for the US: preached the doctrines of eugenics and promoted contraception and sterilisation to achieve "racial hygiene." So successful was she at altering British society in favour of her eugenics doctrines, the British government has chosen her to be included in a "Women of Distinction" line of stamps. The Royal Mail announced this weekend that the face of Marie Stopes, who advocated the sterilisation of poor women to promote the "welfare of the race", will feature on the 50p stamp. The stamps will be available beginning 14 October 2008. Columnist Gerald Warner wrote on his weblog at the Daily Telegraph, "Considering the hysteria nowadays attaching to issues of race, at first sight it seems extraordinary that Stopes should have earned commemoration on a stamp. To the [politically correct] establishment, however, even racist peccadilloes can be ignored to honour a pioneer who helped promote the anti-life culture and relieve women of the intolerable trauma of giving birth to a child with a cleft palate."

informed consent or institutionalized eugenics? how the medical profession encourages abortion of fetuses with down syndrome

youtube blocks videos exposing planned parenthood's support for race-selective abortion
from lifesite: A YouTube video that revealed Planned Parenthood's support for race-selective abortion was first audio-censored and has just recently been removed completely from Youtube for a supposed 'terms of use violation.' Lila Rose, president of Live Action, UCLA's campus pro-life group and editor of The Advocate, a pro-life student magazine, says that the recording is only one of many scenarios where different Planned Parenthood (PP) branch representatives blatantly supported race-selective abortion in phone calls with individuals posing as white racists. Rose reported that Youtube also blocked four previous videos uploaded by members of Live Action and will not respond to any of their inquiries. "It is discriminatory for YouTube to selectively censor material that clearly does not contain inappropriate content," stated Live Action President Lila Rose in a press release. "We will continue to apply pressure on YouTube until it restores the videos."

planned parenthood's dirty little secrets
from daily campus: Planned Parenthood, an organization that claims to promote women's health and well-being, has a deeply stained history of racism, hatred and lies. Margaret Sanger, the founder of Planned Parenthood, summed up the purpose of her organization with this statement: "More children from the fit, less from the unfit." It sounds like something out of Nazi Germany, like eugenics or creating a master race. Sanger founded the American Birth Control League in 1923, which later became the Planned Parenthood Federation of America, Inc. She was a passionate advocate for eugenics, a movement that essentially tried to wipe out any human being deemed genetically "unfit." Another well-known fan of eugenics? Adolf Hitler.

from eursoc: A duty to die? Remember the old sci-fi movie Logan's Run? A few centuries from now, population growth puts so much pressure on the world's resources, it is decided that the young should lead sybaritic lifestyles while the old - that it, anyone over 30 - are killed off to prevent them taking up space. It could well be a parable for our times. It takes two centuries plus countless catastrophes for the Logan's Run dystopia to be created, but the idea that those who are a drain on resources should be eliminated would have to gain respectable currency somewhere along the way. Who better then to speak the unspeakable than 84 year old Baroness Warnock, who has argued that euthanasia should not only be legal but that the elderly and infirm should be pressed towards death. Baroness Warnock speaks as one of Britain's most respected and best-connected authorities on health and ethics. She is described by the Daily Telegraph as Britain's leading moral philosopher, and in the 1980s sat on a committee which advised on embryo research.