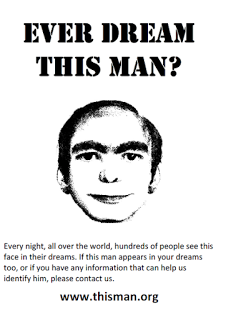 Ever Dream This Man? = Psychotronic Warfare

Before It's News reports on website www.thisman.org about people around the world, who have recurrent dream of same man.  The website's ostensible purpose:

- to help those who have seen this man in their dreams and to foster communication among them;
- to understand who this man is and why he appears in an apparently
pattern-less array of situations in the dreams of such diverse human
subjects.

It's a suspicious oversight - psychotronic warfare - such as HAARP-induced dreams not even considered under website's theory section? The present writer suspects desktop warriors testing victims' gullibility, whether they can be coaxed into belief, it's an archetypal image!  Ted Twietmeyer writes in 2006 article, "New Terror Tool - Induced Dreams," suggests readers remain open to existence of such weapons.  Twietmeyer interviewed victims John and Mary, who would experience same dreams. It would be of interest to know, whether dreamers hear clicks, beeps or experience physical symptoms as John and Mary share - an indication of emf?  It could be HAARP?  What other device could result in same dream worldwide?