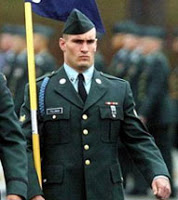 from raw story: Rep. Henry Waxman (D-CA) revealed on Friday afternoon that the White House and Pentagon were holding up a House Oversight and Government Reform Committee investigation into the friendly fire death of former professional football player and Army Corporal Patrick Tillman.

"[T]he Committee wrote to White House Counsel Fred Fielding seeking 'all documents received or generated by any official in the Executive Office of the President' relating to Corporal Tillman's death," noted a press release from the Committee.

But the White House has apparently again invoked its executive privilege to hold up the documents sought by Waxman and Ranking Minority member Tom Davis (R-VA).

In their letter to Fielding, Waxman and Davis doubted that the two documents were the limits of White House-Pentagon communication over Tillman's death.

"It is difficult to believe that these are the only communications that White House officials had with the Department of Defense between April 22,2004, the day Corporal Tillman died, and May 29, 2004, the day the Bush Administration publicly announced that Corporal Tillman's death was a result of fratricide," they wrote.

They also explained what they believed was at stake in this probe.

"These questions have implications for the credibility of the information coming from the battlefields in Iraq and Afghanistan and raise significant policy issues about how to prevent the future dissemination of untrue information," Waxman and Davis wrote to Fielding. "They also have a profound personal impact on the Tillman family. It is for these reasons that the Committee requested documents from the White House."

The Committee said that it expected a response to the Friday letter by July 25. Waxman also scheduled an additional hearing on the announcement of Tillman's death for Aug. 1.

Full information can be found at the Committee's website.