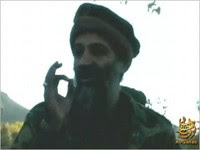 Experts who study al Qaeda videos told ABC News they had not previously seen the clip of bin Laden, which was released with little fanfare and contains no date references, but say it is most likely an unreleased portion of an earlier message.

The al Qaeda leader speaks of martyrdom for roughly one minute as he addresses an unseen group in a mountainous location, wearing fatigues, a watch and ring, and with extensive gray in his beard.

The clip is part of a 40-minute film "Scent of Heaven" from al Qaeda's as Sahab video propaganda arm discovered on the Internet by Laura Mansfield of Strategic Translations. The tape commemorates seven men who were killed and which are termed "martyrs" in the video. As clear from their aliases, they come from Pakistan, Morocco, Afghanistan, Tajikistan and Saudi Arabia.

In the clip, bin Laden talks about martyrdom as he refers to the prophet Mohammad.

"He wished to become a martyr," bin Laden says of Mohammad, before quoting a hadith (prophet saying).