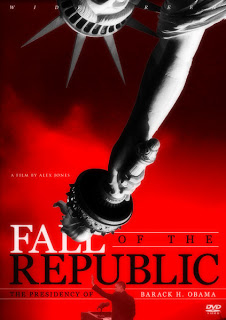 ‘fall of the republic’ exposes how brand obama is destroying america

from paul joseph watson: Alex Jones’ highly anticipated upcoming documentary Fall of the Republic: The Presidency of Barack Obama boldly lifts the lid and unveils the fraud behind Brand Obama and how the globalists are using their newest, and slickest ever puppet to destroy the last vestiges of America’s freedom, Constitution and economy, all while helping the bankers loot the country clean.

The film exposes the agenda that Obama was put in place to accomplish, a world government allied with a bank of the world run by globalist eugenicists hell-bent on destroying America’s first world status and replacing it with a hollow shell of tyranny.

The mind control, the television programming, and all the media talking points that serve to reinforce the image of Brand Obama are laid bare, unveiling the naked ruth, as legendary author and documentary film maker John Pilger recently discussed, that Obama is nothing more than a corporate marketing creation, a skilled hypnotist using seductive tools of propaganda – race, gender and class – to hoodwink the masses into accepting his rhetoric while ignoring the contradiction of his actions.

The film exposes how Brand Obama says one thing – to make people buy into the brand – and then the real Obama does another...

Fall of the Republic is an unprecedented two hour romp through the highly concentrated and brazen levels of tyranny and corruption displayed by Obama and his administration in the short period since they took office.

The end of the movie is encapsulated by the idea that the fight to maintain and restore a free Republic is a constant struggle against those who harbor the virus of evil in their souls.