famine risk recedes as aid gets through to somalia 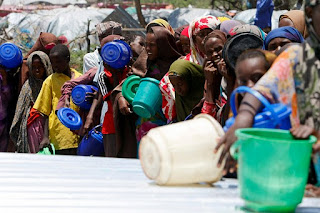 from independent: Conditions for those affected by famine in Somalia have improved dramatically and unexpectedly in recent weeks, with the number of people now at imminent risk of starvation falling by two-thirds, according to the UN. Food agencies have downgraded the famine risk in half the regions in Somalia's disaster zone. This is believed to be the result of an international aid effort and greater access to the affected area. The Islamic insurgent group Al-Shabab has allowed agencies into the territory it controls. At one point, 750,000 people were estimated to be facing imminent starvation. That number has now fallen to 250,000, says the UN.