‘faster than light’ particles may be physics revolution 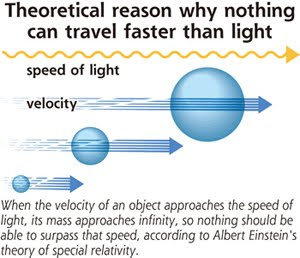 from reuters: Leading scientists said on Friday the discovery of sub-atomic particles apparently traveling faster than light could force a major rethink of theories on the makeup of the cosmos if independently confirmed. Jeff Forshaw, a professor of particle physics at Britain's Manchester University, told Reuters the results if confirmed would mean it would be possible in theory to "send information into the past... In other words, time travel into the past would become possible...(though) that does not mean we'll be building time-machines anytime soon."