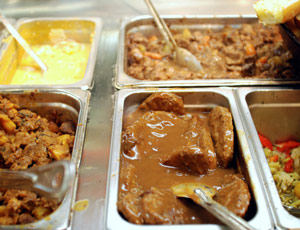 from food safety news: Some 40,000 pounds of frozen ground beef that was intended to be served for lunch at six school districts in Georgia is being recalled because it may be contaminated with E. coli O157:H7, the U.S. Department of Agriculture’s Food Safety and Inspection Service (FSIS) said late Friday.

In a news release issued at 9:49 p.m. Eastern Time, the FSIS said Palo Duro Meat, of Amarillo, TX, processed the frozen beef on Sept. 9 and shipped it two warehouses in Georgia for further distribution to institutions, including the six school districts in Georgia associated with the National School Lunch program.

On Sept. 22, the company reviewed lab test results for the ground beef that confirmed a positive result for E. coli O157:H7, but the frozen beef had already been “inadvertently shipped into commerce,” perhaps “as a result of a sample tracking error,” the FSIS said.

According to FSID, “the bulk of the product” is still in the warehouses and the agency said it is not aware that any of the frozen ground beef had been served in school lunches.

There have been no reports of illness connected to the ground beef.