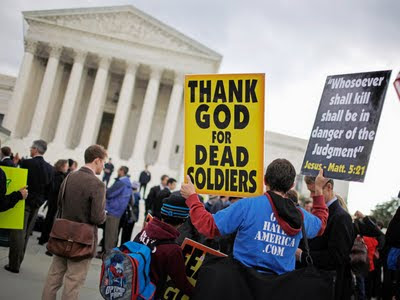 from npr: The Westboro Baptist Church is infamous for picketing soldiers’ funerals with signs like “Thank God for Dead Soldiers” and “God Hates the USA.” Yet the FBI recently invited leaders of the fundamentalist church to the Quantico Marine base in Virginia to talk to FBI agents as part of the bureau’s counterterrorism training program. But after four sessions this spring, the FBI canceled the arrangement amid criticism from inside the bureau, while church leaders claimed that they had been misled. The church group, led by Pastor Fred Phelps and based in Topeka, Kan., says its protests are intended to tell the world that God is punishing the U.S. military for America’s tolerance of homosexuality. The pastor claims to be the prophet of God’s wrath. The FBI first invited the church group to address the FBI’s law enforcement training classes back in 2008. And initially, there were no apparent problems. But the most recent sessions, including three at Quantico and one in Manassass, Va., stirred up controversy.