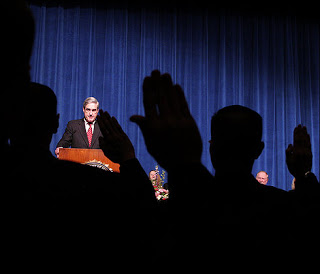 fbi invoked ’emergencies’ to illegally get 1000s of phone records

from washington post: The FBI illegally collected more than 2,000 U.S. telephone call records between 2002 and 2006 by invoking terrorism emergencies that did not exist or simply persuading phone companies to provide records, according to internal bureau memos and interviews. FBI officials issued approvals after the fact to justify their actions.

E-mails obtained by The Washington Post detail how counterterrorism officials inside FBI headquarters did not follow their own procedures that were put in place to protect civil liberties. The stream of urgent requests for phone records also overwhelmed the FBI communications analysis unit with work that ultimately was not connected to imminent threats.

A Justice Department inspector general's report due out this month is expected to conclude that the FBI frequently violated the law with its emergency requests, bureau officials confirmed.

The records seen by The Post do not reveal the identities of the people whose phone call records were gathered, but FBI officials said they thought that nearly all of the requests involved terrorism investigations.