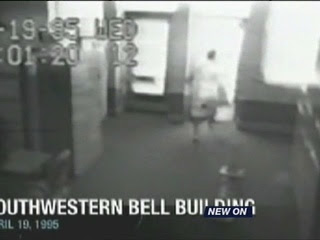 from ap: Long-secret security tapes showing the chaos immediately after the 1995 bombing of the Oklahoma City federal building are blank in the minutes before the blast and appear to have been edited, an attorney who obtained the recordings said Sunday. "The real story is what's missing," said Jesse Trentadue, a Salt Lake City attorney who obtained the recordings through the federal Freedom of Information Act as part of an unofficial inquiry he is conducting into the April 19, 1995, bombing that killed 168 people and injured hundreds more. Trentadue gave copies of the tapes to The Oklahoman newspaper, which posted them online and provided copies to The Associated Press.

The tapes turned over by the FBI came from security cameras various companies had mounted outside office buildings near the Alfred P. Murrah Federal Building. They are blank at points before 9:02 a.m., when a truck bomb carrying a 4,000 pound fertilizer-and-fuel-oil bomb detonated in front of the building, Trentadue said.

"Four cameras in four different locations going blank at basically the same time on the morning of April 19, 1995. There ain't no such thing as a coincidence," Trentadue said.

He said government officials claim the security cameras did not record the minutes before the bombing because "they had run out of tape" or "the tape was being replaced."
"The interesting thing is they spring back on after 9:02," he said. "The absence of footage from these crucial time intervals is evidence that there is something there that the FBI doesn't want anybody to see."

update: fbi denies editing okc bombing tapes
from raw story: The FBI says it did not edit videotapes of the aftermath of the 1995 bombing of the Oklahoma City federal building before turning them over to an attorney who is conducting an unofficial inquiry into the bombing. The FBI turned over more than two dozen tapes taken from security cameras on buildings and other locations around the federal building to Salt Lake City attorney Jesse Trentadue, who obtained them through the federal Freedom of Information Act. Trentadue said the tapes are blank at various times in the minutes before the blast. "They have been edited," Trentadue said Wednesday... Trentadue said the absence of footage before the blast indicates something was on the tapes that the FBI did not want to make public. "They don't do anything by accident," he said. A spokesman for the FBI in Washington, Paul Bresson, said in an e-mail to The Associated Press that the agency did not edit the tapes before turning them over to Trentadue.