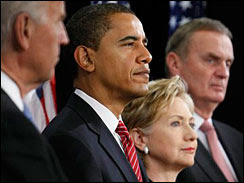 from ap: President-elect Barack Obama on Monday announced a foreign policy team led by former campaign rival Hillary Rodham Clinton and President Bush’s defense secretary, Robert Gates — both early supporters of a war in Iraq that he opposed and will be seeking to wind down. At a news conference, Obama also introduced retired Marine Gen. James Jones as White House national security adviser, former Justice Department official Eric Holder as attorney general and Arizona Gov. Janet Napolitano as secretary of homeland security. The announcements rounded out the top tier of the team that will advise the incoming chief executive on foreign and national security issues in an era marked by wars in Iraq and Afghanistan and terrorism around the globe.

obama vows to continue to invest in military
from reuters: President-elect Barack Obama vowed on Monday to continue to invest to strengthen the U.S. military, increase ground forces and ensure success against al Qaeda and the Taliban. Announcing his national security team, Obama said Defense Secretary Robert Gates had agreed to remain in office, and reiterated his intention to announce a new mission as soon as he took office to end the war in Iraq. "We will also ensure that we have the strategy - and resources - to succeed against al Qaeda and the Taliban," Obama told a news conference. "And going forward, we will continue to make the investments necessary to strengthen our military and increase our ground forces to defeat the threats of the 21st century."

meet the new boss...
from danger room: As predicted, Robert Gates will be staying on as Defense Secretary in the new Obama administration. Count me as psyched. I've been of fan of Gates', for quite some time.

the new obama administration: a lot more of the same

obama to be next neocon US president?
from presstv: The next US government might not be able to keep its promise on 'Change' and might turn into a war-oriented administration, a prominent historian says. President-elect Barack Obama, who inspired Americans during his presidential campaign, defeated his Republican rival John McCain thanks to the new slogans in a historic election last month. During his transition time, Obama has been trying to name his administration among American Israel Public Affairs Committee (AIPAC) lobbyists, foreign relation advisers, and congressmen. Selecting Joe Biden as vice president who supported the Iraq war before it became unpopular was a surprising decision when Obama himself opposed the war. "He [Biden] is a strong supporter of Israel. He even made a statement 'I am a Zionist'," Stephen Sniegoski, US historian and author, told Press TV correspondent in Washington.

neocons ♥ obama
from kurt nimmo: Max Boot just adores Barack Obama’s proposed national security team, especially the retention of Robert Gates as Secretary of Defense and General Jim Jones over at the NSC. “I have to admit that I am gobsmacked by these appointments, most of which could just as easily have come from a President McCain,” Boot fawns.

obama picks former fed chair to head economic advisory panel
from washington post: Barack Obama's appointment yesterday of former Federal Reserve chairman Paul A. Volcker to the growing team advising him on the nation's deepening financial crisis only heightens a central leadership challenge the president-elect will face: how to manage a stable packed with big brains and bigger personalities - and how to make decisions when those high-powered experts disagree. Volcker, as chairman of Obama's new Economic Recovery Advisory Board, will join New York Federal Reserve Bank President Timothy F. Geithner, who will lead the Treasury Department, and former Treasury secretary Lawrence H. Summers, who will run the White House's National Economic Council. The appointment of Volcker, who led the fight to rejuvenate the U.S. economy after the stagflation of the 1970s, is part of Obama's effort to seek "the best minds in America" to deal with the current crisis, as the president-elect put it this week.

obama’s unusual transition: already a co-president
from mcclatchy: America has never seen anything quite like this: The president and president-elect acting like co-presidents, consulting and cooperating on the day's biggest crises. "It's pretty unusual," said George Edwards, a presidential expert at Texas A&M University, in College Station.

obamccain camps coordinated on staff rosters for next govt
from the washington note: A senior Obama campaign official shared with The Washington Note that in July 2008, the McCain and Obama camps began to work secretly behind the scenes to assemble large rosters of potential personnel for the administration that only one of the candidates would lead. Lists comprised of Democrats and Republicans were assembled, sorted into areas of policy expertise, so that the roster could be called on after the election by either the Obama or McCain transition teams. This kind of out-of-sight coordination is rare between battling presidential camps and provides some indication that both Obama and McCain intended to draw expertise into their governments from both sides of the aisle - or at least they wanted to appear interested in doing so if the information leaked out about the list development process. Fascinating tidbit on cooperation behind battle lines.

obama tells disappointed supporters: 'i am the change."
from gateway pundit: Oh, brother... Barack Obama told his disappointed supporters who voted for him on the promise of change only to find him appoint old Clintonites and Bush cabinet members not to be upset - 'I am the change.' McClatchy reported: "President-elect Barack Obama essentially said Wednesday that he is the change, striving to assure Americans that he'll shake up Washington despite filling his administration with old hands from the Clinton administration and the capital's corridors of power. "Understand where the vision for change comes from, first and foremost," Obama said. "It comes from me. That's my job, is to provide a vision in terms of where we are going, and to make sure, then, that my team is implementing." Halleluiah.