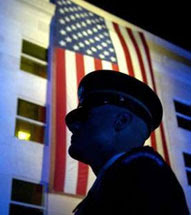 pentagon plans to station 20,000 troops in US for ‘domestic security’

military industrial complex preps US for a 'shattered union'...

from washington post: The U.S. military expects to have 20,000 uniformed troops inside the United States by 2011 trained to help state and local officials respond to a nuclear terrorist attack or other domestic catastrophe, according to Pentagon officials.

The long-planned shift in the Defense Department's role in homeland security was recently backed with funding and troop commitments after years of prodding by Congress and outside experts, defense analysts said.

There are critics of the change, in the military and among civil liberties groups and libertarians who express concern that the new homeland emphasis threatens to strain the military and possibly undermine the Posse Comitatus Act, a 130-year-old federal law restricting the military's role in domestic law enforcement.

But the Bush administration and some in Congress have pushed for a heightened homeland military role since the middle of this decade, saying the greatest domestic threat is terrorists exploiting the proliferation of weapons of mass destruction.

Before the terrorist attacks of Sept. 11, 2001, dedicating 20,000 troops to domestic response - a nearly sevenfold increase in five years - "would have been extraordinary to the point of unbelievable," Paul McHale, assistant defense secretary for homeland defense, said in remarks last month at the Center for Strategic and International Studies. But the realization that civilian authorities may be overwhelmed in a catastrophe prompted "a fundamental change in military culture," he said.

The Pentagon's plan calls for three rapid-reaction forces to be ready for emergency response by September 2011. The first 4,700-person unit, built around an active-duty combat brigade based at Fort Stewart, Ga., was available as of Oct. 1, said Gen. Victor E. Renuart Jr., commander of the U.S. Northern Command.

update1: US troops may be deployed in arizona & southwest US
from phoenix business journal: U.S. Defense Department plans to deploy as many 20,000 U.S. troops within the U.S. for homeland security and anti-terrorism efforts could result in a significant number being placed or having some kind of presence in Arizona and the Southwest, according to security experts. There have been threats against the Palo Verde Nuclear Generating Station west of Phoenix, the Hoover Dam on the Arizona-Nevada border as well as the Las Vegas Strip and Los Angeles International Airport (LAX). Arizona is also home to U.S. military intelligence operations at Fort Huachuca and has become a focal point with border security efforts along the Mexican border. The Washington Post recently reported the Pentagon plans to have up 20,000 U.S. troops placed in domestic locations with the charge of responding to security matters.

update2: st. louis city leader says police ineffective, tells residents to get armed
from ap: A St. Louis city leader frustrated with the police response to rising crime called Tuesday on residents to arm themselves to protect their lives and property. Alderman Charles Quincy Troupe said police are ineffective, outnumbered or don't care about the increase in crime in his north St. Louis ward. St. Louis has had 157 homicides in 2008, 33 more than last year at this time. "The community has to be ready to defend itself, because it's clear the economy is going to get worse, and criminals are getting more bold," Troupe, 72, said Tuesday. Troupe said that when he and residents approached a district police commander last year, they were told "there was nothing he could do to protect us and the community ... that he didn't have the manpower." Police did not immediately return requests for comment. Chief Dan Isom told the St. Louis Post-Dispatch he understands Troupe's frustration but doesn't support citizens arming themselves. Carrying guns, he said, is not a "recipe for a less violent community."