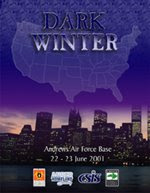 from killtown: On June 22-23, 2001, just under 3 months before 9/11, the U.S. military held a senior-level war game at Andrews Air Force Base called Dark Winter. The scenario of this bio-terrorism drill was designed to simulate a smallpox attack in three states in which one of these states would be Pennsylvania.

As a part of this war game, scripted TV news clips were made to help make this drill as realistic as possible. In one of these clips (clip 3), the TV anchorwoman actor mentions that no groups have claimed responsibility yet (just like with 9/11) and then goes on to blame two groups for the attack. Get a load of which two groups this war game blames for their simulated attack:

Wow, the writers of this pre-9/11 war game named the exact same people that the U.S. government would blame for 9/11! Maybe it should be no surprise as one of the "key player" participants in Dark Winter who played the CIA Director was none other than former CIA Director James Woolsey who was one of the main voices that suggested that Iraq might be involved with 9/11.

Another interesting participant in this drill was controversial New York Times reporter Judith Miller, who would be a victim of a bio-attack by having an anthrax hoax letter sent to her shortly after 9/11, had access to top U.S. government officials and helped pushed the Iraq WMD threat propaganda, and was jailed for not revealing her source in the Valerie Plame CIA leak scandal.