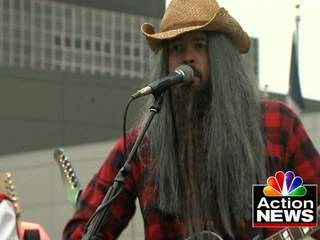 from beliefblog: Rock stars the Foo Fighters played an impromptu show for a group of protesters from Westboro Baptist Church who had come to protest outside the band’s show Friday night in Kansas City, Kansas. Band members jumped onto a flatbed truck, sporting costumes they wore in a recent video parody, parked across the street from the protest, and sang “Hot Buns,” CNN affiliate KSHB reported. The lyrics to the song: “Driving all night, got a hankering for something/Think I’m in the mood for some hot-man muffins/Mmmm, sounds so fine, yes indeed” made pointed response to the church’s protest. As they often do, the protesters held up brightly colored signs that read, “God Hates Fags,” and “Thank God for Dead Soldiers.” Dave Grohl, the frontman for the Foo Fighters, ended the song with a patriotic message: “Ladies and gentlemen, God bless America! Land of the free, home of the brave,” KSHB reported.