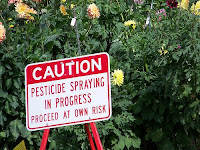 The three studies focused mostly on urban dwellers who consume those sprayed foods. One was done in UC Berkley, CA, another by Columbia University in NYC, and the other by Mt. Sinai Hospital researchers, also in NYC. It doesn't get much more urban than that.

What's Bad About Pesticides
Most effective pesticides contain different types of organophosphates. As of the turn of our current century, many nations had banned chlorpyrifos and diazinon, from domestic use. Those two pesticides were so heavily loaded with organophosphates that just having bug and ant poisons stored in one's domicile caused health problems to occupants.

Organophosphates (OPs) are spinoffs from biochemical warfare research to create nerve gases for killing humans. Scientists soon discovered that the OPs killed bugs too. Of course, the usual toxicology index that protects the industry is based on the notion that if you don't drop dead soon after exposure to any chemical agent, it's safe!