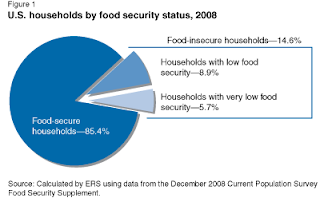 from allgov: The Great Recession has left millions of Americans hungry not only for jobs but even food itself. A new report by the U.S. Department of Agriculture shows “food insecurity” rose dramatically in 2008—to the highest levels since the federal government first began keeping track of this problem in the mid-1990s.

Nearly 50 million people experienced trouble getting enough to eat during some part of last year, up from 37 million in 2007. The increase of 13 million Americans was far higher than even the most pessimistic observers expected, according to The New York Times.

The USDA’s Economic Research Service concluded that nearly 6% of the country (or about 18 million people) suffered from “very low food security” that caused Americans to skip meals, cut portions or not eat at all.