“oh, meltdown. it’s one of these annoying buzzwords. we prefer to call it an unrequested fission surplus.” – mr. burns 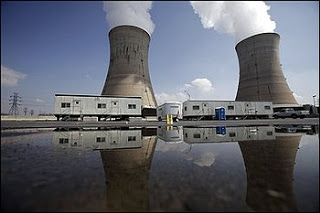 The incident happened Saturday, when the Pennsylvania plant – the same one that went to the brink of meltdown in 1979 – had what officials called an ‘unplanned exposure’ and sent home 150 workers, media reports said.

John White, a spokesperson for the Nuclear Regulatory Commission, said that federal experts sent to the plant found ‘nothing … that indicates safety was ever in jeopardy.’

Diane Screnci, another NRC spokesperson, told CNN that there had been a leak within the reactor building that created minor contamination which was ‘well below regulatory limits.’ She said the incident began when containment radiation alarms sounded. Federal experts have been sent to investigate, she said.

The country’s worst civilian nuclear accident to date occurred at Three Mile Island on March 28, 1979, when the cooling system malfunctioned in one of the towers, causing a partial meltdown of Unit 2.