Food Prices to Rise By Up To 40% Over Next Decade, UN Report Warns 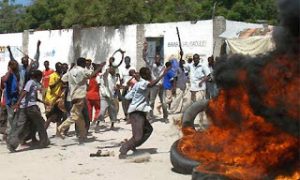 from guardian: Food prices are set to rise as much as 40% over the coming decade amid growing demand from emerging markets and for biofuel production, according to a United Nations report today which warns of rising hunger and food insecurity.

Farm commodity prices have fallen from their record peaks of two years ago but are set to pick up again and are unlikely to drop back to their average levels of the past decade, according to the annual joint report from Paris-based thinktank the OECD and the UN Food and Agriculture Organisation (FAO)...

Although the report sees production increasing to meet demand, it warns that recent price spikes and the economic crisis have contributed to a rise in hunger and food insecurity. About 1 billion people are now estimated to be undernourished, it said.