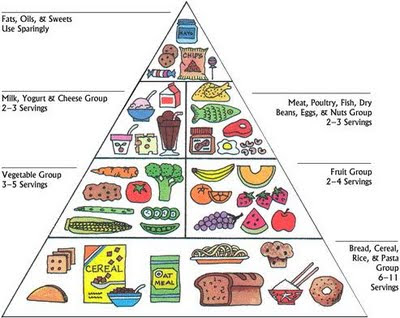 from ibtimes: The US federal government will stop using the food pyramid it first introduced in 1992. The 20 year old food pyramid was a basis for nutritional guideline throughout the United States. However, there were many shortcomings to the old Food Pyramid. For instance, it never advised how much of which kind of foods they should consume. Also, it didn't clearly show the effect on insulin of some high carbohydrate foods.

The previous food pyramid was seen as very confusing, despite a latest update in 2005. With fewer people paying attention to the old Food Pyramid the emergence of a new one was inevitable. The new icon replacing the food pyramid is a plate shaped symbol with wedges designating the basic food groups. The new icon is also compared to a pizza or pie, though it is reported to be similar to a dinner plate.

It is the center-piece of the effort to spread the USDA/HHS dietary guidelines released last January. The new guidelines strongly encourage people to eat more fruits and vegetables, more whole grains and fish and to lower sodium consumption. The guidelines also promote people to exercise more and eat less.

The new plate-shaped icon will be unveiled on Thursday. The four colored sections include fruits, vegetables, protein and grains with a smaller circle for dairy. The White House will also play a big part by coordinating these dietary guidelines with Michelle Obama's Let's Move initiative.