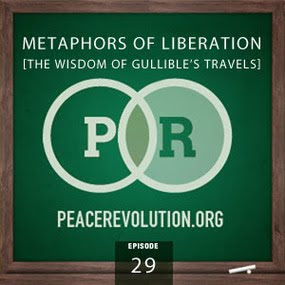 1. Introduction Video & Invitation to the Tragedy and Hope online community
2. Peace Revolution primary site (2009-2011)
3. Peace Revolution backup stream (2006-2011)
4. Jonathan Swift on Wikipedia
5. Gulliver’s Travels on Wikipedia
6. Gulliver’s Travels (republished 1863)
7. Gulliver Mickey (1934): Mickey is first seen reading Gulliver's Travels while the mice orphan children are pretending too be sailors. After ruining their game Mickey tries to make it up to them by retelling the Liliput sequences of Gulliver's Travels pretending it was a real event that happened to him by portraying the role of Gulliver. The story ends with Mickey saving the town from a giant spider (Pete). However after telling the story, one of the children dangles a fake spider attached to a fishing rod which scares Mickey out of his wits.

previous: episode028 - how to spot the lie